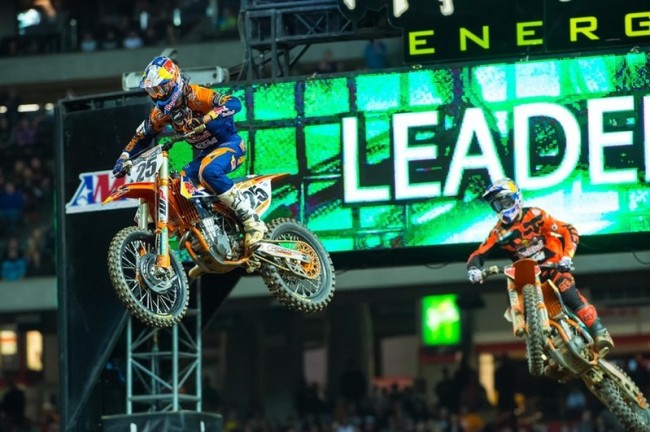 Roger DeCoster has stated James Stewart was not “directly” to blame for Marvin Musquin’s mistake on the last lap at Atlanta that ultimately cost him the race win.

It is an interesting word to use, and to me it implies that DeCoster feels James was therefore indirectly responsible! Marvin made the mistake on his own but would he have made the mistake if Stewart had obeyed the blue flags and let them through earlier?

DeCoster said: “After the race a lot of blame was given to James and I just want to make things clear that the mistake from Marvin was not directly caused by James and we shouldn’t blame him for it,” said DeCoster. “Credit to Marvin, he rode an amazing race and was under tremendous pressure from Ryan [Dungey] for the majority of the race. To lead for 19-consecutive laps is no easy task and how quickly he has adapted to the big bike class in just eight rounds is very impressive.”

It seems Roger has taken the high road on this one and wants to move on, albeit with a cleverly worded statement!