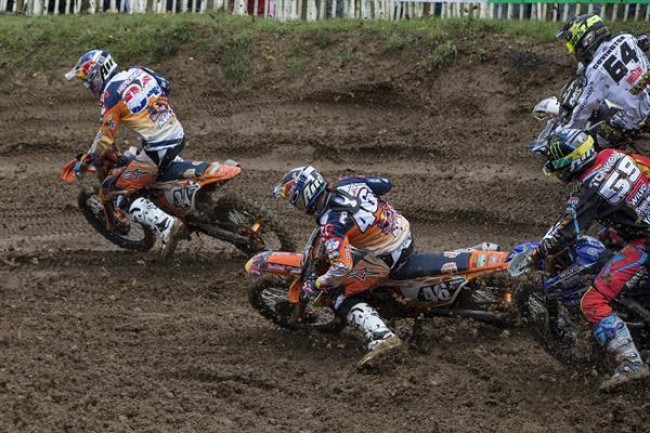 As the only Red Bull KTM factory rider to compete in every round of this year’s Italian Championship,Glenn Coldenhoff has been showing continued improvement each weekend. He was seventh overall after the opening round at Alghero, fifth after round two at Lamezia Terme and just missed the podium by finishing fourth at Ottobiano.

Coldenhoff, who joins the factory team for the 2016 season, said he was satisfied with his weekend. “The riding was already good and I didn’t have any more problems with arm pump this weekend. We made a good step in the right direction and changed the suspension quite a lot today. We still have one and a half weeks to Qatar (the start of the world championship season) so we will test some more and I will work on my speed, because that’s also not perfect yet. The season is long and we don’t have to worry about anything because I’m happy so far, and I’m confident that I will be good in the future.”

Factory teammate Tony Cairoli, who has just extended his contract with the Red Bull KTM Factory Racing Team for another three seasons, did not compete in the series and is concentrating on preparation for the opening round of the MXGP World Championship on February 27 in Qatar.

MX International Valence 2016
With these three race victories, Jeffrey Herlingsrepeats his result from the Hawkstone International MX last weekend in the UK to close off a very solid pre-season race practice.

Also riding in France was Herlings factory teammate and fellow Dutch rider Davy Pootjes who delivered two solid moto results for 6-4 and overall sixth place in MX2. He did not compete in the final Open class race.

Team Manager Joel Smets said Valence completed the factory team’s race practice before the start of the world championship season, although there would be more testing in Belgium before the opening round. “Jeffrey is riding well and is very motivated and we couldn’t wish for a better end of our pre- season race preparation. I’m satisfied, so is he, and so are all the crew. He’s now able to stay calm and learn from his mistakes and I believe this has made him a very complete rider.”

Herlings’ maturity was well illustrated in the way he tackled the final Open class race at Valence. Although the MX1 riders had the obvious advantage over the smaller bikes, he got away well at the start and was running in fourth place. Herlings then rode a clever and concentrated race to gradually close down the gap to the leading MX1 riders and moved into second place in the final stage of the race, behind KTM-supported rider Shaun Simpson. He made the pass into the lead with two laps to go and carried it to the finish to wrap up a very successful day’s racing.

Team boss Smets said he was also satisfied with Pootjes’ weekend. The young Dutch rider took a 6-4 in the two MX2 races but did not compete in the Open race. “He’s a natural born sand rider,” Smetssaid. “So this is not his favorite surface here in Valence. But he took two good starts and did well, even though he’s not yet at top speed.”

In MX1, Simpson followed up his class win at Hawkstone last weekend with a 3-2 moto result for a podium place and said he was satisfied with his preparation for the new season. “We’ve put in some hard work, the bike is good and we’re going in the right direction. I like these pre-season races. It’s different to training and testing. It blows away the cobwebs and it gets rid of the nerves,” he commented. Simpson said he plans to have one last race in France next weekend before the start of the main season.

The 2016 MXGP and MX2 World Championships begin with the opening round in Qatar on February 27.