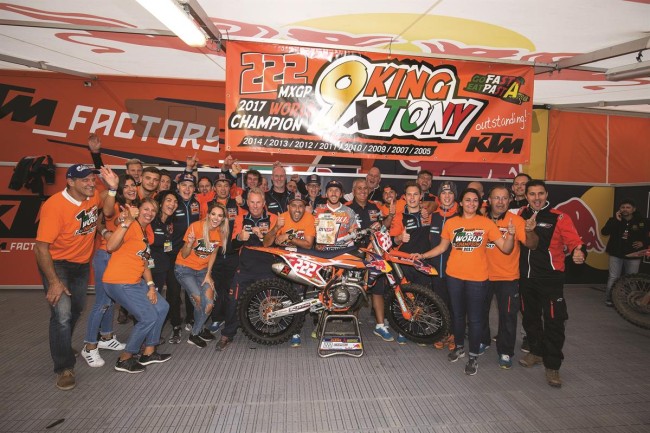 Celebrations came as Cairoli headed almost every statistic for 2017. He posted the most pole positions (six), led the most laps, scored nine moto wins (a total that Jeffrey Herlings overtook on Sunday at Assen), won six Grands Prix from 18 up until the Netherlands fixture and appeared on the podium 13 times. Importantly, and after two injury-hit years, Cairoli held the red plate as series leader from round seven and showed with 31 years of age that he is still the top dog in what has been called the most competitive term of MXGP to-date.

2017 has been a stellar season for the entire Red Bull KTM crew with three times MX2 World Champion Herlings becoming an authentic protagonist and 2018 title threat in his maiden campaign on the KTM 450 SX-F and Glenn Coldenhoff again appearing on the MXGP podium. MX2 success is also close with Pauls Jonass’ performances and Jorge Prado’s prolific holeshots. The zenith came at the Grand Prix of Belgium where all three MXGP riders filled the rostrum spots. Herlings also excelled in the United States with a victorious wildcard appearance at the final Lucas Oil AMA Pro National in Indiana.

The story of the year is Cairoli however, and his fantastic turnaround from a broken arm in 2015 and neck/arm nerve damage in 2016 (when he still finished as series runner-up) to again prevail in Grand Prix and therefore nudge closer to Stefan Everts’ record haul of ten world titles and 101 wins (Tony is on 83).

Tony Cairoli: “It was an important championship for me because we didn’t start as the favorite, and for everybody who was ‘talking’ [doubting and criticizing] this is for them. I know what it takes to make a solid and consistent championship. We made it and I’m really happy about this. It was an amazing season, one of my best. It is amazing that I can still improve myself after almost fifteen years in the world championship. I’m proud of this and I think we can still work to be a bit better in some cases but right now I want to enjoy this title. It is the first with the KTM 450 SX-F for me, which is very special. The rest were with the 350 and when I was injured, we were never really in a position where we could test [the 450] a lot. This year I felt very good with the bike and we improved a lot in the winter.”

Tony will now try to close the book on 2017 with more champagne at the Grand Prix Pays de Montbeliard next weekend and then represent his country at the 71st Motocross of Nations at Matterley Basin on October 1.

Pit Beirer (Motorsport Director): “Again the Cairoli and KTM combination gives us a special moment in our long motocross racing history and this is a product of a lot of work by a lot of people. Tony’s season was fantastic to watch with many highlights and proves he is still the reference for the class and all the kids that one day want to reach the top of this sport. Jeffrey also fought back well and it is hard to think how 2017 could have gone much better for us. 2018 will soon be on our minds but the whole crew really deserve to enjoy this one.”

Claudio De Carli (MXGP Team Manager): “Tony won a lot of titles in a row and it is unusual to get the championship back after two years. The KTM 350 SX-F was essentially made for him and his style but when we took the 450 Tony was pretty much injured and we couldn’t develop the bike as much as we wanted. When he was fit the technical side also went very well; the whole package came together and works so well now. He’s had a fantastic year. I remember him saying that he wanted the title at the end of last year and we all wanted to push for the same thing, but I also wanted to keep his feet on the ground. We found a good way. Every title has its own story but this one was special and emotional because of the comeback. He is an incredible rider. Everyone said he was too old and he was finished … but it was not like that. I want to thank each and every member of the team and the factory who have helped and to Pit and Robert for their support, trust and a great opportunity to be part of this KTM story.”

Robert Jonas (Vice President of Offroad Motorsports): “The previous two years were a little bit difficult for Tony and there was a period where we did not know he could strike back in such a way. Perhaps the addition of Jeffrey to the class gave him an extra boost because at the beginning of the season he looked fresher and stronger than ever. He could really show the young guys that he was still the one to beat. He is such an experienced rider and with so many titles in the backpack, he is one of the most confident. Next season won’t be an easy one for the rest of the class and their target will still be to beat Tony Cairoli one day. I want to thank everyone for all their hard work because sometimes it is very challenging and our crew is outstandingly good. This is one of our secrets because everyone in our ‘family’ knows the target and is pulling the rope in the same direction. Days like today and podiums in Belgium and Switzerland are pretty special. It has been a very cool season.”