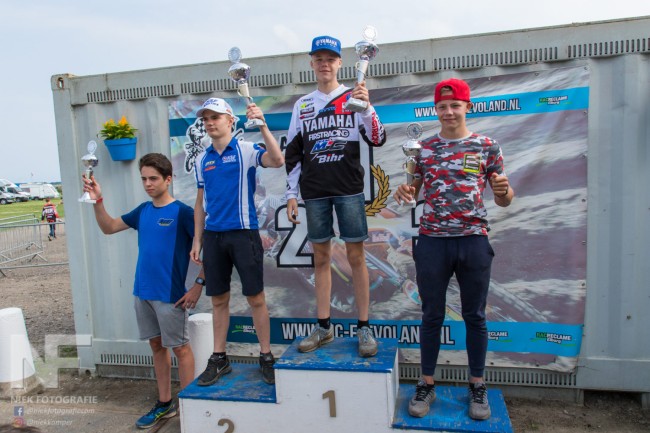 With a break in the GP calendar, another round of the KNMV ONK Championship took place at Lelystad this weekend.

In the MX1 class it was Ceriel Klein Kromhof who won the overall on the day. Rick Satink won the first moto but Klein Kromhof struck back in moto two. Satink could only finish fourth in the second moto which meant he ended up second overall. Luca Nijenhuis was strong on his Pfeil Kawasaki and stood on the last step of the podium in third.

In the MX2 class, Rene de Jong who is a sand specialist got his day off to a perfect start by taking the win in moto one. However, the very talented Roan van de Moosdijk won the second moto to grab the overall. Sander Agard-Michelsen who missed all his winter preparation through an injury is getting back up to speed and took third overall.

Nancy van de Ven and Courtney Duncan decided to race with the men as preparation for the WMX series. They both showed good speed amongst the men and ended up eighth and thirteenth respectively.

Rick Elzinga dominated the 125cc class as he won both moto’s on his MJC Yamaha. Raivo Dankers and Raf Meuwissen were tied on eighty one points but Dankers had the better second moto so he ended up second overall. Brit, Christopher Mills just missed out on the podium and had to be happy with fourth overall.

Jett Lawrence won the first 85cc moto ahead of Kay de Wolf and Kay Karssemakers. However, the second moto was a different story as Kay de Wold brought home the win for the overall but Lawrence was less than a second behind! Karssemakers again ended up third for third overall. it was an improved weekend for Liam Everts as he ended up fifth overall.

Check out the results below: