Kiara Fontanesi becomes the most successful woman in motocross! 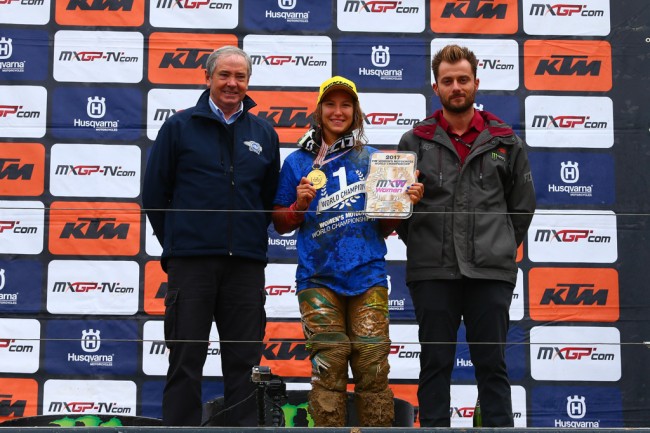 One of the most recognized riders in women’s motocross, Kiara Fontanesi, is now the most successful in the history of FIM Women’s Motocross, now having 5 FIM WMX titles to her name Kiara is an idol to many.

Kiara Fontanesi was born and raised in Parma, Italy, where she started riding at a very young age. Kiara took after her brother who ripped around on a mini-bike. The young gymnast one ride later was hooked and ready to race.

In 2009 Kiara, at the age of 15, decided it was time to take on the world as she entered the FIM Women’s Motocross World Championship. While she didn’t see success early, a season of training and determination worked in her favor as she came out swinging at the final round of the 2009 WMX championship in Lierop, The Netherlands, winning the race!

One year later, in 2010, Kiara asserted herself as a permanent force to be reckoned with as she pulled off second over all at the season opener in Bulgaria and then backed up the result up with a series of podium finishes and a couple of race wins finishing fourth in the overall championship standings.

In 2011, Kiara continued to improve which resulted in several strong races and finishes in the 2011 WMX World Championship. After the season of bar to bar racing and impressive results, Kiara settled for second behind the WMX champion Stephanie Laier.

2012 was a coming of age for Kiara, after coming so close to the title in 2011, the eighteen year-old was on a mission to accomplish her life long dream of becoming World Champion. Not only did she do just that, she blew away the competition and wrapped up the championship one round early in Matterley Basin, Great Britain.

World domination had been achieved, but at nineteen years old one world title wasn’t enough and Kiara went on to claim her second consecutive WMX world title in similar style. After two years of dominance in women’s motocross, Kiara was finally challenged. Although the competition was very stiff in 2014, Kiara still managed to rise above and claimed her third FIM WMX title.

In 2015 the battle for WMX supremacy was a battle between Kiara and  2008 WMX world champion Livia Lancelot, if it wasn’t Livia winning the round it was Kiara and vice versa.  Both riders took five race wins each, but it was Kiara who took the most overall wins, three to Livia’s two.

Heading into the sixth and final round at the circuit of Loket in the Czech Republic only two points separated the protagonists in what was set to be a tense match up for the 2015 WMX crown. Livia ended up seizing her engine on the sighting lap of the final race, which meant Kiara was able to wrap up the FIM Women’s Motocross World Championship, for the fourth time in row.

In 2016 the competition continued to strengthen and Kiara made it difficult to contend for the championship as she had three scoreless second races during the season. Kiara finished 4th in the championship 88 points behind the champion Livia Lancelot.

2017 was a testing year for the women as they faced varied conditions through out the 6 race season and coming into the final round at Pays de Montbéliard, France, only 5 points separated the top 4 women. Anything was possible as Kiara came into the race 4th in the championship standings. While the other riders struggled to have 2 strong race results Kiara scored a first and a 3rd giving her one more point to claim her 5th World title over runner up Livia Lancelot.