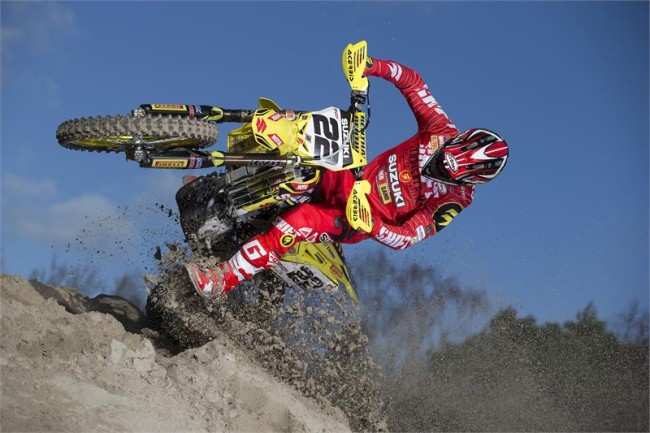 Team Suzuki World MXGP team rider Kevin Strijbos is focussed on this weekend’s opening round of the 2016 FIM World Motocross Championship at Losail International Circuit in Qatar. Here, the Belgian talks about his winter training, new changes in the camp, pre-season internationals; and his enthusiasm for the upcoming season.

There have been a lot of changes in the team in the last couple of months with Stefan coming in. I had been doing the same things each winter with the same trainer and now we made the switch to Willy Linden on Stefan’s advice and this has been a good change. I started my training for the 2016 season pretty early because I had my injury. We started with running. Normally I’m really bad at it but we built-it-up slowly and it has been going smoothly.

We waited riding until September, just to make sure the problems with my thumb would not reappear. And it didn’t, so we started riding two times a week so I could have time to get used to it again. And then in December we did a little teambuilding with the guys. We went to France to do some enduro riding at Freddy Loix ‘s place. It was a lot of fun and gave me some good feeling for the bike. I learned that I’m very bad with heights while doing some climbing in the mountains but it gave us all some good laughs!

In January we kept training on the Factory RM-Z450 Suzuki two times a week and it was still going good. I had no problems with my thumb and I was really comfortable on the bike. The weather was so bad in Belgium that we journeyed to the south of Europe to the RedSand MX Park in Spain. We did two weeks of intensive training there. It was really nice with the whole team, we could ride together and push each other further. I was a little afraid for my thumb because we did so much riding and it started to hurt, but after a quick check-up all was good. I had no inflammation and it did not get any worse, so all was positive.

When we came back to Belgium, it was almost time to leave again. The motocross races are earlier each year and we wanted to do some international events before the MXGP season. I went to Hawkstone Park in the UK feeling very positive and felt like I could compete for the first-step of the podium. But that wasn’t the case. Again in Valence we had the same things going on but we figured out what was the problem. It’s good that we know now what it was and it was a good try-out for the team and myself.

Riding at the training sessions has been really good, at the races it’s a little less, but we are working on that. I’ll believe that it will be a lot better when we arrive in Qatar. I’m training so hard this winter. I have been so tired after training but that’s a good sign I think. And we had a little rest now last week so I’m feeling fresh and ready to go now.

I’m hoping to compete for the podium in Qatar this weekend, to have some good days and some good riding. I believe top-5 should be a good goal, we have worked hard for it. Even though we had a lot of changes, it’s all been going good with the team; with Stefan and with Sylvain still being here. The new wind in the team has been a good one, everyone is ready for the new season, so let’s hope it kicks-off with a bang!