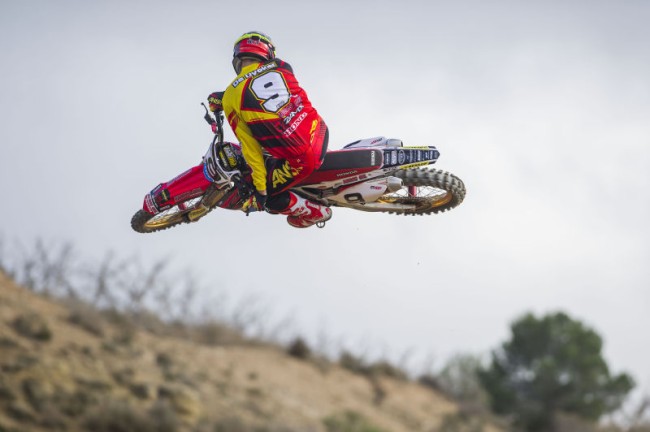 One week ahead of the first round of the FIM MXGP World Championship De Dycker was dotting the i’s and crossing the t’s in France. The popular Belgian was due to race in his second pre-season race this weekend at the Lacapelle-Marival International. In consultation with orthopedic surgeon Dr. Ghijselings Ken’s leg was successfully fixated during a surgery earlier today.

Working hard on his fitness with coach Joël Roelants and having made excellent steps in the development of his Honda CRF450R the gentle giant of the MXGP paddock was quietly confident about the new season. The injury of Ken De Dycker is obviously a huge blow to the newly formed 24MX Lucas Oil Honda team. Over the next few days the squad will consult its partners and decide on how to deal with the absence of their star rider.

Ken De Dycker: “Unfortunately injuries are a part of racing. But it’s such a pity to know that I will not be racing for a while now. I took quite a big hit and broke my thigh and had a big gash on my elbow. Luckily the surgery went well as they placed a pin in my thigh bone, so now I feel brand new again!
Over the winter everyone put in a lot of effort and I felt we were right on target. A big thanks to Joël my trainer, who also helped me with the practical stuff to organise my surgery, all our sponsors, fans and friends who send me wishing well messages. I’m sure we’ll be back strong. I can’t wait to show everyone what we’ve been working for.”

Marc Boone, 24MX Lucas Oil Honda team principal: “It’s tough to be confronted with an injury like this. Obviously this leaves all of us very disappointed  even more so because things had been going well. During training and testing we saw how motivated and professional Ken is and how much he gelled with the 24MX Lucas Oil Honda CRF45OR. First and foremost we wish Ken a full and speedy recovery. I’d also like to thank the staff of Royall Hills and everyone who came to assistence after Ken’s fall. We’re convinced that he will come back stronger.”