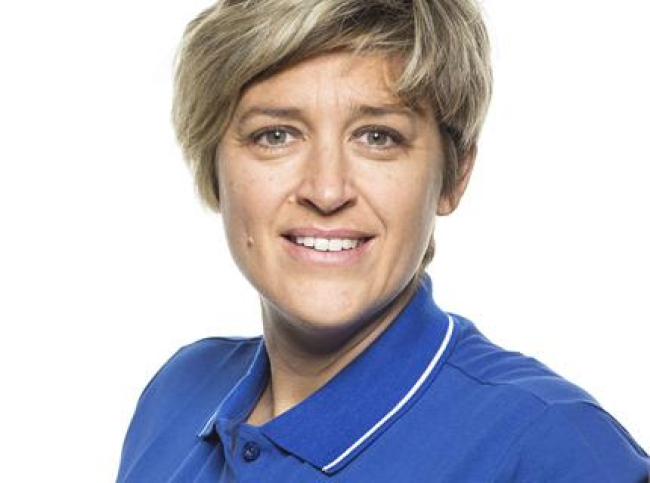 Being a rider himself, Kelly’s brother introduced her to the world of motocross and that’s where she met Stefan Everts, who became her husband. At that time, Kelly was still studying to become a teacher in special needs education: “After finishing my studies, I immediately got a job as a teacher. Even though the job was great, it soon became clear to me that the combination of a full-time job, supporting Stefan’s career and running the household was simply too much to manage. For a short period of time I tried combining it all with a part time job, but eventually I decided to quit teaching.”

Flash forward to Kelly’s current job as financial manager at Suzuki World MXGP. The things that would drive anyone else crazy, seem to be Kelly’s favorite aspects of the job: “I truly enjoy fixing problems. Not a day goes by without someone knocking on my door with some kind of issue. Most of the time I have to push my other tasks to the side, like invoicing, paying bills, HR stuff… but I don’t mind that. The only thing that kind of bothers me about being the problem solver is that I have to be ‘the bad guy’ quite often. A sign that says ‘don’t shoot the messenger’ would come in handy sometimes.” (laughs)

Even though Kelly might not always have the greatest news to share with the team, the team spirit is very much alive at Suzuki World: “I don’t see our team as staff, I see them as family. We don’t just assign tasks, we discuss things as a group and then decide who’ll take care of what. The riders are also very dear to me. Whenever they are at GRP in Lommel, I always feel like I have to physically be there with them. Deep down I know everything would be just fine if I’d work from home, but I keep coming over to see them in person. It really delights me that the bond we all share behind the scenes is starting to translate into great results on the track.”

Kelly is always in the front row at the GPs. She also makes sure that everything goes exactly according to plan. Arranging airplane tickets, booking hotels, getting the hospitality unit ready, … it’s all part of the job. Out of all the countries she’s travelled to, the MXGP of Lommel in 2016 is Kelly’s favorite moment with the team so far: “We worked day and night towards this GP. And then to see it all come together with Kevin taking first place … that was a beautiful moment.”

Most positive characteristic: My directness. With me it’s either black or white, grey doesn’t solve any problems.
Most negative characteristic: I can get pretty uptight from time to time.
Favourite food & drink: Champagne, Campari and the typical Belgian ‘friet mosselen.’
Favourite music: Anything by Milow.
Favourite GP: Lommel is still my favourite, although I never really get to fully experience it, because I keep bumping into people I know every five minutes.