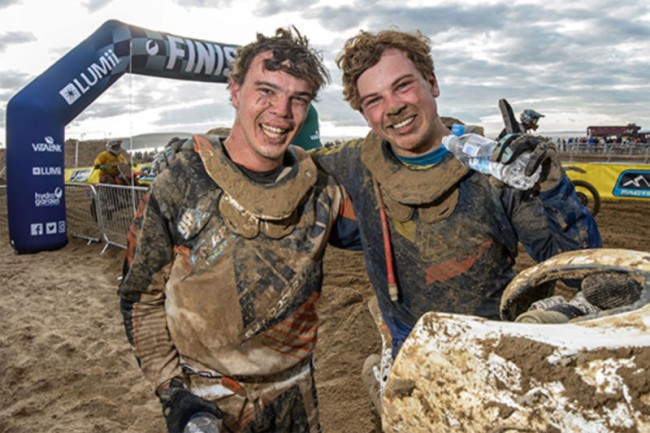 Todd Kellett won last year’s HydroGarden Weston Beach Race three-hour adult solo race in emphatic style, and this year enjoyed a whirlwind close to his season by taking up the reins at the Hitachi KTM UK team and delivering his debut MX2 overall win at the British Motocross Championship in Blaxhall, Suffolk, rounding out the series in fifth position.

Kellett’s beach win last year was a poignant one, as he battled lap after lap in motocross style for the full duration of the grueling race to come out victorious at the event, while also winning the HydroGarden Weston Beach Race Young Gun award for being the highest placed 19-year-old competitor in memory of Dan Horton-Tilley. Todd’s brother Ty also finished in the top 10, and these two local lads from Langport have competed at Weston as a ritual for many years – of course many will know the story behind that made Todd’s win so special. (In addition both brothers had competed in the quad and sidecar race the day before, to most this would appear somewhat bonkers.)

A regular in the British Motocross Championship, Todd was given the last-minute opportunity during the closing part of the season in the Hitachi KTM UK team, which is KTM’s main entry in the British Motocross Championships, and had a dream first weekend in the MX2 class for the squad as he won his first ever British Championship moto, and with it took the overall victory, clearly repaying his team for their faith in him despite such little pre-preparation testing time. Todd will return to Husqvarna machinery with his sponsors St Blazey MX and SJ Hodder for this year’s HydroGarden Weston Beach Race event and he just can’t wait to get going again.

“Looking back on the HydroGarden Weston Beach Race, it was still a learning process last year. In the first two hours I was really comfortable, I didn’t really know what position I was in and I was enjoying the event. In the last hour I worked out that I was in contention for a win, and knew that if I really, really wanted to win this I had to make it happen. I didn’t push that hard until the last hour, and it was a weird sensation. You just have to go with the flow, and when the feeling is there you’ve got to go for it.”

It’s clearly in the family, as Todd and Ty sign up to the event every year. They are well-supported by their parents, whom have also competed on the sands of Weston-Super-Mare. Winning the adult solo class is certainly something special, and something Todd will look to repeat again in 2017.

“My mum and dad have done the race on bikes, sidecars and quads, it’s just down the road. It’s something we always do, like an end of year bash really. We’ve done it for so long, it’s in the blood I guess. It was amazing, I won as a junior but to win as an adult really is a dream come true.”

“I think for anyone racing Weston to come across that line is quite an achievement in itself. To be the first man over the line, is unbelievable. You can’t even put it into words. But for every single rider who makes it to the end I think everyone deserves a pat on the back.”

For many the HydroGarden Weston Beach Race is incredibly tough, a three-hour battle from start to finish. Todd explains now it’s a little easier on him from a fitness point of view, but it’s still a huge buzz.

“Personally at the standard I am racing now I find it more of a race, but years ago when I was 15 in the big bike class I definitely found it really tough. For hobby racers it really is a struggle, it’s a great test for them and it’s a great experience. The whole weekend from Friday to Sunday everyone is just buzzing – and after the race on Sunday it feels like everyone is a bit sad they have to go home for work on Monday.”

“For Weston we don’t really get the chance to do any specific training for it. For this year there is a gap at the end of the British series, so I might try and put some special level. All the riders are at good fitness so it won’t be that side that makes the difference, it’s what is done on the day.”

“I’ve already entered for the quads. We’ve got a Can-Am 850 just bought. My main sponsor Stuart is coming in with me in the quads – he’s not very confident for the big class in the solos, so it’s nice for us to share it as a two-man team in the quads. I started last year, I was absolutely terrified. I hadn’t really had much time on the quad so to go down that straight for the first time with maybe 600 other guys I was definitely very scared! I don’t know if it will be me or him doing it this year, we’ll see.”

Talking about his brother Ty, who also has enjoyed some fantastic results in the race despite hardly swinging a leg over a bike during the year, it’s a special spectacle to see these two battle it out on track.

“Ty definitely doesn’t spend a lot of time on the bike, and I think he must just find something special to go the extra mile at the beach race. We’ve done it for so long so even if you’re fit, or not fit or not on top of your game you just do it anyway. For Ty it’s just a blast, and he’s had some great results. Obviously doing it so many times you get some knowledge and experience, so it’s very impressive to see what he can do.”

“It’s only half an hour or so from home a lot of friends and family come to watch. You can see a lot of people waving riding round and it’s always good to have extra local support.”

Overall Todd, a qualified Barber who still works during his time away from training, has had a very special year and we’re all looking forward to seeing what he can do on the beach.

“I was riding for St Blazey MX Husqvarna, it was good and I was enjoying it – we had some good results in the British and the European championship. Roger Magee approached me and offered me the opportunity to go to KTM, and I love the bike a lot. It’s been a blast – I had two days on the bike, went to Blaxhall and managed a fourth and first for the overall, which was definitely a dream come true. Not only for myself but also for the team.”

“I ended the season in fifth in the ACU MX2 British Championship and 13th in the European Championship despite missing one round. Obviously, I’m looking forward to the HydroGarden Weston Beach Race where I’ll be riding my St Blazey MX / SJ Hodder Husqvarna, and while there’s a lot of experienced guys out there, we’ll be pushing hard for a result.”