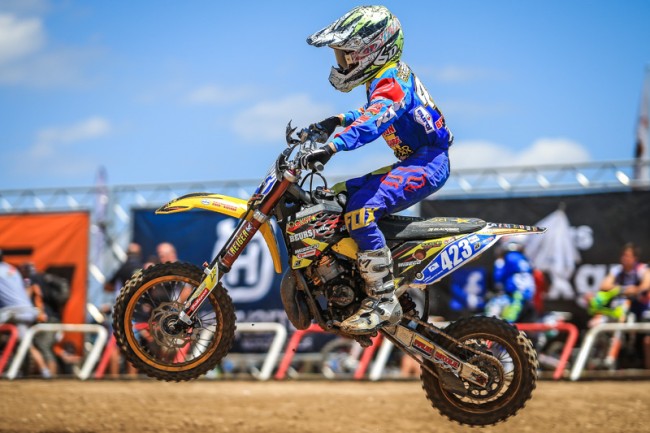 It may have seemed like the longest start straight in the world for most of the 65’s but it was the perfect distance for Spain’s own Raul Sanchez who was oozing adrenaline at the start of race one and took the holeshot and early race lead. Unfortunately, the freshly watered track caught the little Spaniard out which saw him drop back to sixteenth when he crashed on an uphill.

Holland’s little ripper Kay Karssemakers took full advantage of the gifted lead and knuckled down right away while France’s Florian Miot tried to keep up. Although he put in a good effort, Miot couldn’t quite match the pace of Karssemakers and ended up exerting too much energy, which allowed the top qualifier, Hungary’s Adam Kovacs to close in. At the half way mark Kovacs dropped the hammer on Miot and took over second, where he remained for the rest of the race.

Meanwhile, it wasn’t over for Miot who soon had company in the form of Czech Republic’s Radek Vertovskyand Russia’s Matvey Vopilov. A missed line late in the race saw Miot drop back to fourth as Vetrovsky capitalized on the error.

Speedy little Dutchman Kay Karssemakers sealed the deal on his European Open 65cc title mission by claiming the Fox Holeshot and controlling the final race from start to finish.

While that sounds smooth sailing for the youngster who also won race one, it was not that easy as the poleman Adam Kovacs was on him from gate drop. Kovacs put in a good effort but as the wind picked up he fell off balance and looped out into the infield. The small Hungarian managed to re-enter the track instantly, but lost second position to Radek Vetrovsky.

Although he was handed second, take nothing away from Vetrovsky, he was ripping in race two and pushed Karssemakers all the way to the finish. Kovacs managed to regroup and rode smart for third while Spain’sAdria Monne and Florian Miot rounded out the top five.