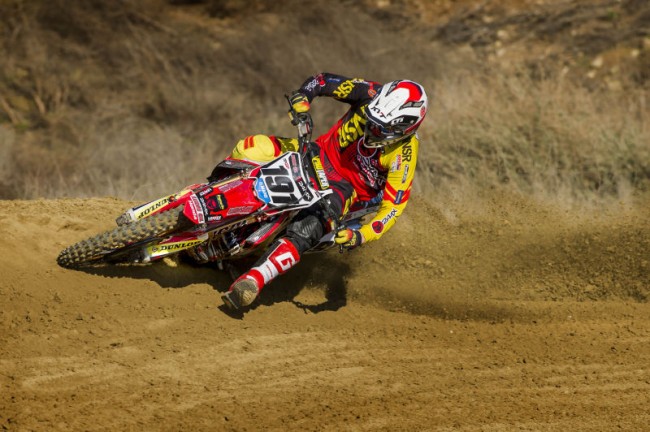 Wednesday, March 2, 2016 — 24MX Lucas Oil Honda rider Matiss Karro was forced to sit out the MXGP of Qatar due to an injury to his left knee. The 24-year old Latvian successfully underwent surgery yesterday and will soon start his recovery.

After recording two excellent second places in the MX1 class at the Lacapelle-Marival internatonal Karro had to put his foot down early in the final moto. Although he didn’t crash he unfortunately damaged his left ACL and meniscus in the process. After performing reconstructive surgery Dr. Ghijselings was mildly optimistic about the expected ‘downtime’ for the former British MX2 champion.

Matiss Karro: “I will have to walk with a special brace for 10 days. After that I’m in for one month of intense physio. Hopefully I will get the green light to start riding the bike again once that month is finished. Of course I’d love to return to as soon as possible. That’s the goal but it’s even more important to come back 100% ready. A big thanks to the team, Honda, 24MX and all my other sponsors, fans and friends for their support. I’m grateful to have good people around me and that’s the best motivation to return as strong as possible.”

Marc Boone, team principal 24MX Lucas Oil Honda: “It’s a nice step forward for the whole team, also mentally to learn that we won’t miss Matiss for as long as expected before. Actually Dr. Ghijselings made it clear that this was one of those cases were you could keep riding if you’re prepared to take those chances. As a team we think it’s a wise decision to have underwent the surgery. Long-term that’s the best option. We can all look forward to rebuilding and get Matiss back to the high level he was competing at. At the moment we’re finalizing our negotiations to replace Ken De Dycker as well. We hope to be in a position to announce his replacement next week.”