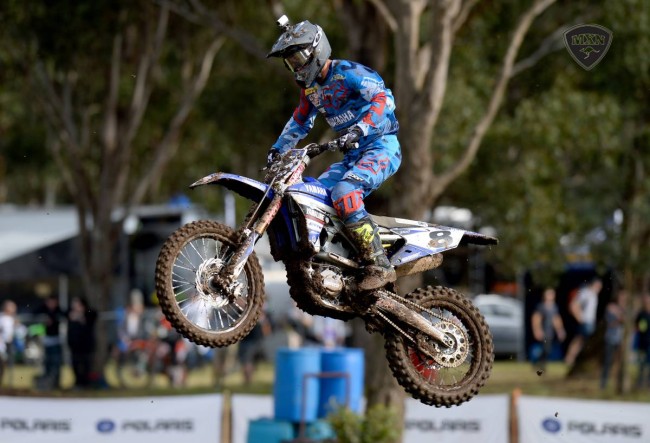 It was a CDR Yamaha affair at round two of the MX Nationals today, with Kade Mosig and Daniel Reardon taking a race win each, before Mosig collected his second ever overall win for his MX1 career.

On a tough and technical track, The Monster Energy MX1 class dished out a mixed bag of results over the day – the round proving to be a challenge for even the most experienced racers.

Race one for the MX1 class had barely gotten underway when defending champion Matt Moss went down in the first turn. After being carted off the track by Racesafe, the Team Motul Suzuki rider was air lifted from the track with unconfirmed injuries.

To add to the carnage, red plate holder, KTM’s Kirk Gibbs also started his day on the wrong foot. After falling hard in moto one, Gibbs went straight into points damage control. The championship leader eventually managing to put in a charge from dead last all the way to third, finishing the moto behind teammate Styke in second, and Mosig who claimed first.

In moto two, it was all about CDR Yamaha’s Daniel Reardon. Taking an early and confident race lead, Reardon took the chequered flag ahead of Gibbs and Styke, to claim his first race win since returning from retirement.

However at the conclusion of round two, it was Mosig who had real reason to celebrate. Finishing the final moto of the day in fourth, Mosig did exactly what needed to be done to earn himself his second MX1 overall for his career, sharing the podium with Gibbs in second and Styke in third respectively.

“It feels great to get this overall win, and to get some more solid championship points on the board,” he said.

“We have had really awesome preparation for this season, and I have a great team behind me in CDR Yamaha.

“Everyone is putting in one hundred per cent effort to get me on the podium and it’s definitely showing when I can give back these great results.”

To check out how the rest of the Monster MX1 class went today, and to re-watch all of the action from every race at Appin, tune in on Wednesday night via www.nrgtv.com.au for all of the racing on demand!

For a full list of results head to www.mxnationals.com.au