Justin Hill on winning his first 250 main of the year 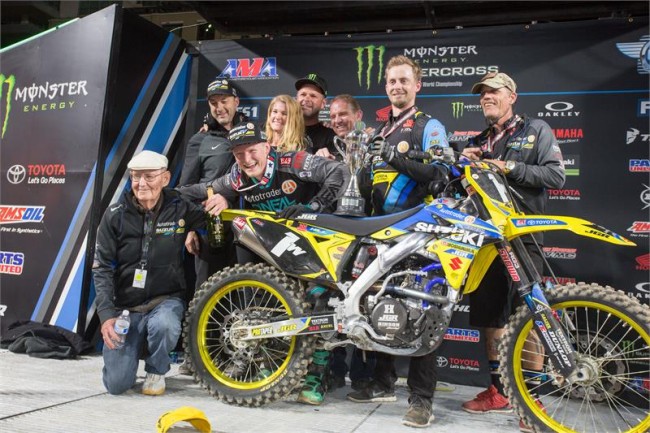 The Autotrader/ Yoshimura/ Suzuki Factory Racing Team had a monumental day at San Diego’s Petco Park for round six of the 2018 AMA/ FIM World Supercross series on Saturday where Suzuki RM-Z250 rider Justin Hill logged the fastest lap time in qualifying, won his heat race, and meticulously picked apart the competition in winning the 250 Main Event in front of 41,237 fans.

Hill’s 250 teammate, Phil Nicoletti, came from last place to just outside the top-10 while RM-Z450 rider Weston Peick fought his way up to seventh after a first-turn crash.

Hill rode with speed and confidence from the very first lap of practice, jumping rhythm sections on his RM-Z250 that only a few of the 450 riders were clearing. The reigning champion clicked-off the fastest 250 qualifying lap and used the first gate choice in his heat race to clear the field and win in convincing fashion. The Oregon native started the Main Event in third place and methodically paced leader Adam Cianciarulo for 11 laps. Hill passed for the lead and stormed away for the win and is now only 12 points out of third place in the standings.

Nicoletti suffered a crash early in the 250 Main Event, but fought up to 11th place. The New York native sits 13th in the standings.

In the 450 class, Peick suffered misfortune when another rider fell in the first turn. That incident didn’t prevent Peick from slicing his way through the field and collecting seventh place. He’s only eight points out of third place in the standings.

Malcolm Stewart returned for another run at the podium with the Autotrader/ Yoshimura/ Suzuki Factory Racing Team. Unfortunately, Stewart was collected up in the same first turn crash that took down Peick. “Mookie” ended the night in 17th.

Justin Bogle was looking to improve in his third race back, but a crash in his heat race knocked him out of action. The initial injury report is a broken upper arm; an updated status will be released when available.

“Perfect days don’t come very often, so I’m basking in the goodness of going 1-1-1…fastest qualifier, heat win and Main Event win. Everything was clicking with the team and my RM-Z250. I was ripping the whoops and rhythms in practice, doing what I needed to do to get the top qualifying time. We watched film after practice and decided to leave the bike alone, because it was working really well.

“My strategy in the Main Event was to calculate everything around me. At one point I thought I could trail him [Adam Cianciarulo] and execute a wham-bam pass towards the end. Then I realised there were some people behind us that were riding well, and if we tangled it could jeopardise the win. I started increasing my intensity and pressing harder. I knew I had the speed. For the most part I was trying to be calm about picking up the pace and not do anything rash. I had good runs through the whoops and knew where I could gain. The pass was made before the whoops so I could pull away in the sand section. I had a couple ideas on accident avoidance in order to stay ahead. Once I got a small gap I tried to get back into a zone click away good laps.”

“San Diego was a bummer, plain and simple. I was feeling well all day. I was the sixth-fastest rider in practice, which was better than where I have typically been qualifying. I got off to a decent start in the heat race, made a few bobbles, and worked my way up to third. I was feeling solid in the Main Event. I probably would have come out of the first turn in the top five, but [Ken] Roczen went down and I fell. The bike got stuck on top of me. I got back going and riding really well, passing from 17th up to seventh place. I would have liked to pass [Justin] Brayton and [Broc] Tickle, but I’m happy with the progress I’m making. The Suzuki RM-Z450 is working really well.”

“I finally rode well, even though the result doesn’t show it. The bike handled awesome through the whoops. I felt strong, despite being banged up from the previous race. I had a brain fart on the second lap of the Main Event and tucked the front end in the sand. I tried to put in clean laps after the crash and worked up to 11th place. My entire body hurts, so it will be nice to take a week off now that the 250 West series takes a break. I’m going to head back to North Carolina and spend my time there training and riding.”

“I wasn’t feeling that good all day, until the Main Event came. I went down in the first turn, got back going, and climbed up to 12th place. Then I hit a tuff block and went down. Overall, I was riding well. I just need to clean the mistakes up and make it happen in order to get the results I feel I should be getting.”

“It was a race filled with highs and lows. The obvious highs being Hill showing the capabilities of the Suzuki RM-Z250 and winning the 250 Main Event. Peick again showed a lot of promise. If it wasn’t for the first turn crash I really think he could have been in one of those front spots. Unfortunately, Bogle was landed on by another rider in his heat race when he failed to jump the triple. It was a pretty bad crash that left him with a broken upper arm. He was obviously in a lot of pain afterward. I feel bad that it happened, because Justin was starting to find his groove. Stewart was feeling under the weather all weekend. Despite that, he fought hard and looked to have a good finish in the bag until he crashed and fell back to 17th. Nicoletti was in a great spot on the opening laps of the 250 Main, but he lost the front end and went down. I’m looking forward to building on our results at the next round.”

The Autotrader/ Yoshimura/ Suzuki Factory Racing Team will travel to Arlington, Texas for round seven of the 2018 Supercross series on Saturday, February 17th. Arlington will also mark the first round of the 250 East Supercross series, featuring RM-Z250 riders Jimmy Decotis and Kyle Peters.