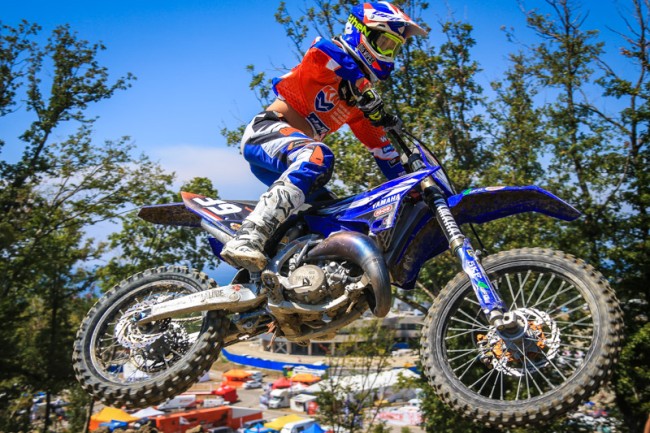 With temperatures hovering well above 30 degree’s Celsius, combined with scorching humidity, the world’s fastest motocross kids took on their first challenge of the weekend here in Orlyonok, Russia, where the qualifying sessions for the FIM Junior Motocross World Championships 125cc and 85cc, and the European Open 65cc Cup, took place.

The sun baked rocky surface of Orlyonok meant traction was scarce, and throttle control and line choice was of the essence. On a track so slick, and hilly, the key is to carry momentum. You don’t want to be getting hard on the gas and lighting up, wheel spin means you’re not accelerating and on a surface this hard, all you’ll be doing is burning rubber and destroying your tire. With that said, there were a few smooth criminals who mastered this technique today, namely, Roan van de Moosdijk, Rene Hofer and Alexey Orlov, as they set the fastest times of the day in their 30 minute qualifying sessions.

In the class that is so often described as the cheat sheet on what to expect from the next generation, it was Dutchman Roan van de Moosdijk who edged out long-time rival, Jago Geerts from Belgium, to go pole. Both riders are typically sand experts, but it seems they are bigger fish than the sandy ponds of The Netherlands and Belgium can handle.

Geerts is the recently crowned European EMX125 Champion, while Van de Moosdijk finished fifth in the European series after missing two rounds due to injury. Before coming to this event, the Dutchman, Van de Moosdijk, who is trained and mentored by former FIM Motocross World Champion, David Philippaerts, said, “I want to be world champion, that’s my goal in Russia. For the entire season my goal was simply to do my best every week. I think I achieved that goal and it has always been my dream to be the best in the world.”

Van de Moosdijk is one step closer to making that dream a reality. Meanwhile, after dominating the last two rounds of the European Championship, Jago Geerts was the hot favorite coming in, and has already got things off to a good start. The Belgian star was less than a second off of the pace, but second pick at the gate isn’t too bad.

There is an amazing story behind the kid that finished third in the Qualifying Practice session today, Australian Caleb Grothues. The young rider lost two of his fingers from the knuckle down in a nasty crash a couple of years ago. He was told he may not be able to ride again, and instead of letting it get him down, he just ‘knuckled’ down and set out on a mission to prove the doctors were wrong. Despite the craziness he has been through, and the adjustment to living and riding without two fingers, he rolled up in Russia today and set the third fastest time ahead of Jan Pancar and Jakub Teresak.

The name Pancar may be one to watch, as a young Slovenian following in the footsteps of another Slovenian, whom you may have heard of, Tim Gajser. Amazingly Geerts, Grothues, Pancar and Teresak all finished on the same lap time, 1:54, and if that is anything to go by, we are in for some insanely close racing tomorrow.

Fresh off of his European Championship domination where he won both moto’s by miles for the title, Austria’s Rene Hofer validated his gold plate by topping the charts in qualifying earlier today. The Austrian was 1 second faster than the local legend, Svyatoslav Pronenko, who also looked like he had the track dialed. For those willing to see what a lap with Pronenko looks like, you can visit our Youtube Channel: www.youtube.com/mxgptv tomorrow where we will have uploaded a lap with the Russian.

Japan may be the biggest producer of dirtbikes, but for one reason or another there seems to be an absence of world-class Japanese riders. Fear not though, this could be about to change as Japanese star Joe Shimoda has set the third fastest time here in Orlyonok, 1 second faster than the kid in fourth,Meico Vettik. Vettik, comes from Estonia, which is exciting for him to have some recognition already, especially with the 2017 FIM Junior Motocross World Championship set to take place in his homeland next year.

Rounding out the top five was Latvia’s Kristians Freimanis, who put in his hot lap of a 2:03.624 relatively early. Although, he was almost caught by Sweden’s Noel Nilsson, who put in a 2:03.878 on the final lap of his session, for sixth.

Welcome to the Alexey Orlov show! Orlov was on fire today as he stomped the qualifying session with an amazing time of 2:08.604. The little Russian put on a fine display of riding for his friends and family, and set the pace, a whopping 2.4 seconds faster than fellow Russian, Kirill Vorobyov who finished the day as the second fastest rider. While the Russians stole the show, the Latvian’s might have something to say come race day. Karlis Reisulis and Edvards Bidzans were also feeling the flow. Both were only 1 second off of Vorobyov’s pace, so they could work out how to find that valuable time during track walk tonight. Meanwhile, a pair of Ilia’s, in the form of Ilia Krasnitskiy and Ilia Khabirov rounded out the top six.