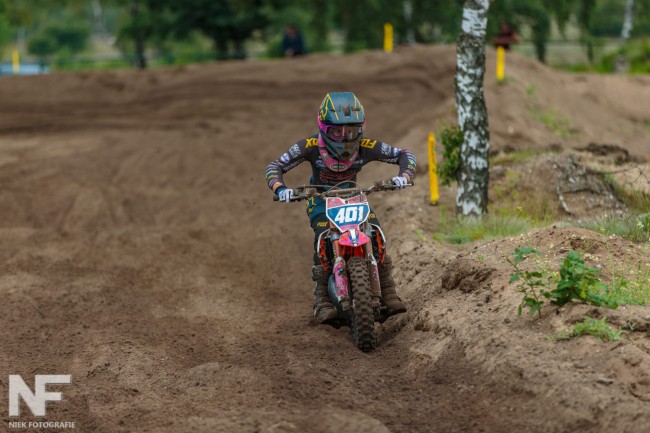 The next generation of talents will battle it out for the 65cc and 85cc Junior World Championships this weekend. We’ll take a look at some of the contenders on who has a chance of taking glory in Trentino, Italy.

Let’s start with the very talented, Lotte van Drunen. She might be a girl but she certainly knows how to ride a bike. Van Drunen made the switch to the Beursfoon KTM team this year who do a very good job with youth development. With the way she’s riding there’s no reason why she can’t challenge right at the front this weekend. Last year she finished fourth overall in Australia and she’s improved a lot this year.

Young Czech talent, Vitezslav Marek has been riding great this year. He actually won a moto in Australia last year and had a great shot of winning the Junior World Championship but a DNF in the second moto cost him. This year he’ll be hoping to clinch the title and he certainly has the speed to do it.

Latvia seem to have a number of young talents emerging at the moment trying to following in Pauls Jonass footsteps. One rider to keep an eye on is Tomass Saicans.

Young Russian talent, Semen Rybakov is having a good season and currently leads the EMX65 NE Zone series. He should be right at the sharp end this weekend in Italy.

Hoping to follow in Arminas Jasikonis footsteps is young Lithuanian rider, Marius Adomaitis who’s having a good season and will be motivated for a good result in Trentino.

Young Spanish rider, Joel Canadas is having a good season as he leads the EMX65 SW series and should suit the hard pack track of Trentino.

The French federation do a great job developing the youth riders and they’ve a strong trio of riders competing in the 65cc class this weekend. Basile Pigeois, Felix Cardineau and Mano Faure are the French names to keep an eye on.

Two Aussies to watch out for are Ky Woods and Kayden Minear, the latter finished seventh overall in Australia last year so will look to do even better in Italy now he’s got another year of experience behind him.

Young American talent, Austin Schafer makes the long trip to Italy and won’t be looking to just make up the numbers.

When it comes to the 85cc class, the Dutch have a few top talents who will be looking to run at the front this weekend.

Cas Valk is having a good season on his Husqvarna and has improved a lot so should be towards the sharp end. He even contested the EMX125 round at Valkenswaard earlier in the season just for fun and only just failed to qualify but he was close!

The young talent of Ivano van Erp knows how to win at this level after winning the 65cc Junior World Championship in 2017. He’ll be looking to add the 85cc title to his name this weekend as well.

Young Latvian, Edvards Bidzans won the EMX65 title in 2016 and has a lovely style. He didn’t travel to Australia last year but will be looking to run at the sharp end in Italy this weekend.

Latvian talent, Karlis Alberts Reisulis has improved a lot this year and has been riding plenty in the Netherlands which shows a lot of commitment at such a young age. He’ll be hungry to run at the front in the Junior World series.

Another young Latvian to watch out for is Roberts Lusis who’s currently leading the NE EMX85 series. The future of Latvia looks to be in good hands as they’ve three very exciting prospects.

Young French talent, Quentin Prugnieres is with the BUD Kawasaki team who know how to spot a talent so we shouldn’t be surprised if he’s a front runner at Trentino. Another French talent to keep an eye on is Maxime Grau.

Italy have a nice young talent in Valerio Lata who finished tenth in the EMX85 series last year but has improved a lot in 2019. He should be a challenger.

Belgium have the talented Coenen brothers, Sacha and Lucas who will be looking to run at the sharp end. With not so many young Belgians coming through at the moment the future of top Belgians could depend on these two!

Young Dane, Mads Fredsoe has an EMX65 title to his name so clearly has a lot of talent. Since making the move to the 85cc things haven’t gone as well but he’ll be eager to impress this weekend on the world stage.

Competing for America in the 85cc class is Nicholas Romano who will want to mix it with the best riders from Europe on his KTM.

Australia have two exciting prospects in the form of Ryder Kingsford and Cambell Williams.

Young British prospects Finlay Evans, Charlie Heyman, Bailey Johnston, Kiean Boughen and Ollie Colmer will be looking to learn as much as possible racing in the World stage this weekend.