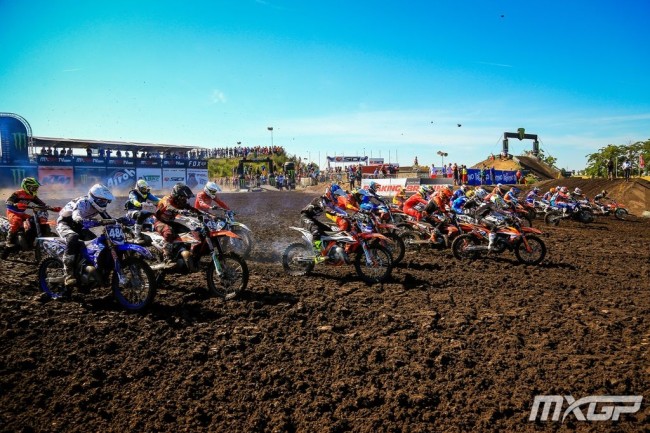 This weekend lots of Motocross talent from all over the world head to Pietramurata, Trentino in Italy to battle for the Junior World Championship crown.

The 125cc class is set to be very competitive with 81 entries.

Heading into the weekend the two favourites are Mattia Guadagnini and Tom Guyon who are 1-2 in the EMX125 series. Italian, Guadagnini started the year in fine fashion winning five moto’s from the first six but French talent, Guyon has been closing the gap in recent weeks. Guadagnini made a mistake last year when battling for the Junior World Championship title in Australia so won’t want to make the same mistake this year.

Sitting third in the EMX125 series is Swiss talent, Mike Gwerder who improves nearly every time he goes to the track this year. He’s been super consistent and likes the hard pack tracks so with a good start he has what it takes to challenge right at the front.

Coming into the season, Jorgen-Matthias Talviku had something to prove after leaving the MJC Yamaha setup. The Estonian made the move to the A1M Husqvarna team under the watchful eye of Tanel Leok and he’s really stepped it up.

After Jonathan Barragan quit Motocross, things weren’t looking to good for the Spaniard’s but there’s a few young guns starting to step up after Prado. Oriol Oliver has showed some great speed this year but hasn’t always got the best of starts. If he gets good starts in Italy this weekend he has the speed to be right at the front.

It’s hard not to be impressed with young Dutch talent, Kay de Wolf. Last year he missed out on the 85cc World title but speed wasn’t the issue. As a 125cc rookie it might be tough for him to win this weekend but if he gets a good start anything is possible.

Young German rider, Simon Laengenfelder has been a lot more consistent this year on his WZ KTM. At the last round of the EMX125 series he ended up second overall and showed he can ride hard pack so will be looking to challenge for the world title this weekend.

One surprise this year has to be Liam Everts. Many people thought he could have done with another year on the 85cc since he’s so small but he made the jump up to the 125cc and has made tremendous progress. He’s got a lovely technique – quite similar to his father so he’s nice to watch. This weekend he’ll look to just have fun, there’s not much pressure on him this year but 2020 the expectations will be much higher especially after a strong rookie season.

Coming into the season as a relatively unknown rider, Guillem Farres Plaza has exceeded expectations on the F4E KTM. The young Spaniard has had strong rides at the sharp end of the EMX125 series and favours the hard pack track so should be comfortable in Italy this weekend.

The Brits have two big hopes in Eddie Jay Wade and Joel Rizzi. Jay Wade know’s what it takes to win at this level after winning the 85cc World Championship in the past. However, he picked up an injury in Germany so might not be fully fit this weekend – if it doesn’t hamper him with his riding he shouldn’t be far away.

As for Rizzi, his season started out superbly well but at times hasn’t had much luck picking up a few too many DNF’s but the speed is really good. He’ll be hoping to mix it up at the front in Italy.

Other British riders to look out for in the 125cc World Championship this weekend are Louie Kessell, Buster Hart and Preston Williams.

This year, some American’s will make the trip to the Junior World Championship which is always pleasing to see. Chase Yentzer is the sole American in the 125cc class but he’ll be looking to show the EMX125 riders he’ no slouch.

The Australians will also be ones to keep an eye on. After hosting the event last year they will make the trip to Italy. Alex Larwood and Blake Fox will be contesting the 125cc class for the Aussies this weekend.

There’s plenty of other riders not mention who are capable of an upset such as David Braceras, Alessandro Facca, Adam Kovacs, Cameron Durow, Andrea Bonacorsi, Kjell Verbruggen, Florian Miot and Camden McLellan – it’s a deep class with plenty of talent!