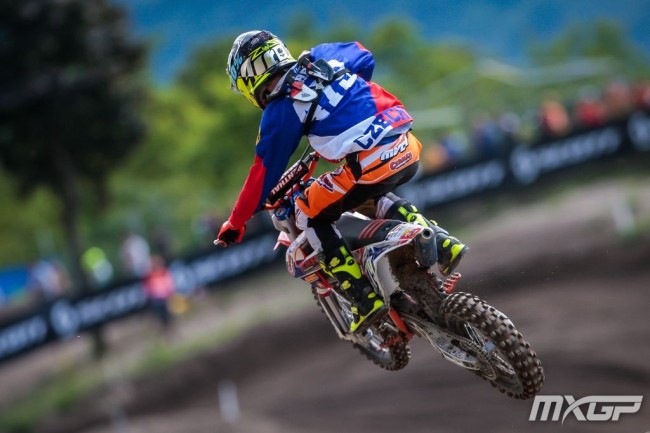 In the 125cc class, similar to the EMX125 series it was a battle between Italian, Mattia Guadagnini and French rider, Tom Guyon. Guadagnini won the first moto by quite a distance after Guyon got a bad start but things were different in moto two.

Guadagnini again got the better start but had Guyon all over him as the pair pulled away from the rest of the pack. Guyon made a move on Guadagnini but made a mistake on the same lap which let the Italian off the hook and meant he clinched the world title.

Now he has the World title, Guadagnini will be hoping to do the double by winning the EMX125 title too but Guyon will be out for redemption in that series!

As for the 85cc and 65cc riders it’s a huge weekend for them because they only get to race in the GP paddock once a season at Loket so it’s a chance for them to showcase their talent and get their name out to the world during the Junior World series.

In the 85cc class, it was another young Italian who put on a good show in front of his home crowd to clinch the title.

Valerio Lata who rides for the Marchetti KTM team dominated proceedings as he went 1-1 on the day. That will give him so much confidence heading to Loket in two weeks time so now he’ll want to do the double. Young Latvian, Edvards Bidzans ended up second overall as bad starts cost him a chance to battle for the overall win.

The 65cc class was a much closer affair and a young Czech rider broke Italian’s dominance and denied them a clean sweep.

Vítězslav Marek didn’t get a good start in the first moto but came from way back to recover a second place finish. Young Aussie, Ky Woods won the first moto to give him a real chance of winning the title.

However, in the second moto, both Woods and Marek didn’t take the best of starts and young Brit, Ashton Boughen took advantage as he led for over half the race. In the end Marek was just too fast and made a string of passes to get to the front with two laps to go. It’s a special day for the young Czech talent as he grabbed his first world title.

Woods recovered well to get back to third behind fellow Aussie, Kayden Minear which meant he ended up second overall.

A special mention to Lotte van Drunen who secured third overall riding with boys – she is a special talent!

As for the Nations classification, Italy didn’t disappoint the home fans and dominated the event. France ended up second with team GB rounding off the podium – a great day for the Brits!