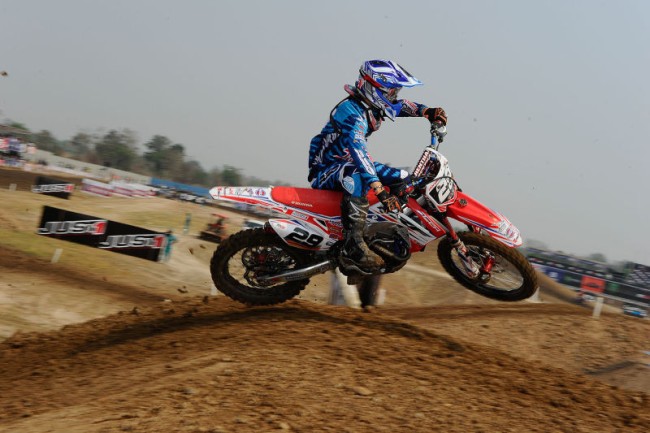 The second Grand Prix of the World Championship MX2 took place in Thailand, on the new Supahnburi circuit. The riders were facing a tough track, with many bumps and a hard ground. As expected, was difficult to deal with the big heat for both, bikes and riders.

In the Qualifying Race on Saturday the Honda JTech riders Damon Graulus and Henry Jacobi started in the back, laps by laps they moved up till the Sixteenth and Seventeenth position.

Unfortunately at the first corner of the First Race Jacobi, after a great reaction when the gate dropped, he crashed badly. The German was forced to retire and he couldn’t participate at the Second Race either.

Graulus in Race 1 was involved in the crash of the teammate. Restarted in the last position he was able to move into the Seventeenth place. In the Race 2, after a start in the mid-pack, at the second corner he crashed because of a rival on the ground. Restarted again last, the Belgian finished the race in Seventeenth position.

After the first two overseas races, the Motocross World Championship comes back to Europe temporarily, with the MXGP of Valkeswaard, Holland, on the 27th and 28th of March

“First race I crashed at the start. After that my weekend was over, I couldn’t breathe so was not possible to ride. Saturday anyway was not too bad considering the heat but still not enough.”

“Another bad weekend for me! My riding went in the positive direction Sunday morning but then I was two times unlucky in the start with other riders crashed in front of me. Unhappy about myself and the results. I have three weeks now to focus on Vakenswaard. I want to thank my Team and my mechanic for the good job, my friends, family and the people for the support.”