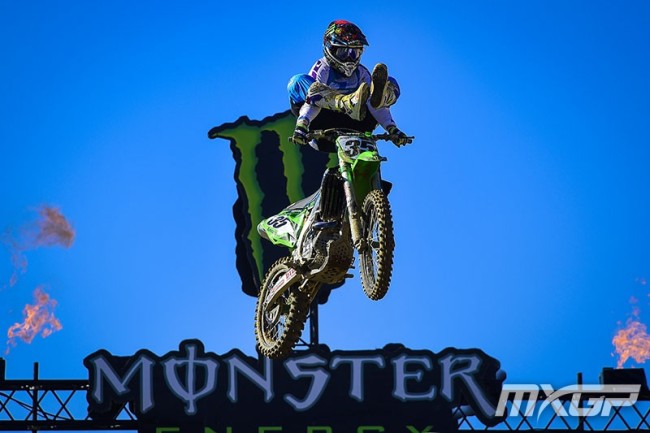 Josh Grant rode very well at Glen Helen GP at the weekend to claim second overall around a track that he is very familar with.

In the press conference Josh said “At the moment I have nothing for 2016, I would move to Europe for sure, if something comes up I would do it tomorrow. If something was on the table in Europe I would do it, I would love to race the Grand Prixs. I just love riding my dirt bike.”

It would be nice to see another top American have an attempt at racing the World Championship, the problem is where would he go? Most the factory rides in the paddock are already took except for Suzuki.

Rumours where that Steven Frossard could sign for Suzuki but his long term injury puts that move in doubt. Would Josh Grant be a good signing for Suzuki? There is no doubt that Josh is fast and speed wouldnt be the problem, could he adapt to the different type of tracks all around the world? It would be risky but if he came over with a good attitude, not too over confident and listened to Everts then it could work out.

However, if Josh came in to the series over confident and thought he could challenge for the world title then he could struggle with the reality and how difficult it is to be fast at more than one type of track as well as racing with the best riders in the world.

Kawasaki Racing Team could also have a third rider, it is thought to be undecided at the moment, Josh could be the third rider for them which would bring less pressure. Having a top American in the team willl also bring more exposure so it is something KRT could consider.

One thing that is nice to see is that Americans are starting to become more interested in the World Championship, Jessy Nelson also stated it is something that he would like to do before he hangs his boots up and Darian Sanayei is likely to be in the GP paddock in 2016.

It will be interesting to see what is next for Josh Grant whether he gets an AMA ride, comes to GP’s or there was even talk of him retiring earlier in the year!