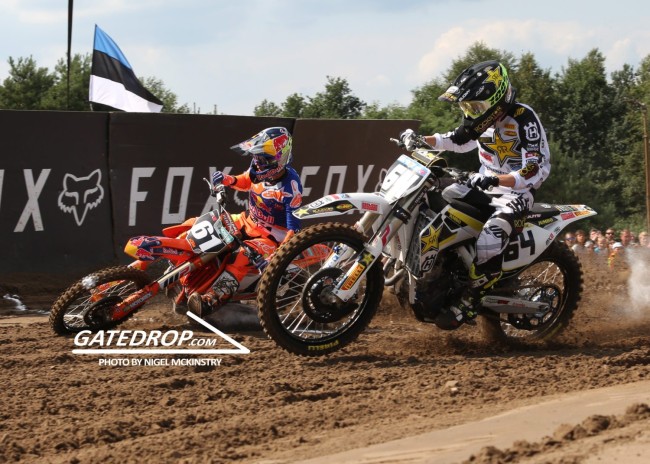 Jorge Prado was very impressive during the MXGP of Lommel as he won his second MX2 GP of his career at the brutal sand track of Lommel. This GP win comes after his impressive win in Trentino earlier in the year.

Perhaps we shouldn’t be so surprised about his win in Lommel as only in his second ever GP race last year at Assen the Spaniard battled with Jeffrey Herlings. Prado is clearly incredibly strong in the sand and loves those types of conditions.

The most impressive thing about Prado is he just doesn’t give up, there is a lot of fight in the youngster. In the first moto, Pauls Jonass passed him but Prado didn’t just roll over and let his team mate run away with victory, he made Jonass work hard for the moto win.

With another winter behind Prado he is only going to be stronger next year so plenty more GP wins could just be around the corner.

Prado had the following to say after his second GP win of his career:

Jorge Prado on his win..

Yeah, I’m feeling pretty happy. It’s pretty difficult to win a GP. Everybody is riding really fast so it’s hard work. This weekend the track was really tough and you really had to give it your all, that’s what I did. I had good starts both times and I kept it for the win.

On both of his races..

In the first moto I started second, I passed Seewer already after two corners and I was leading by quite a lot but then Pauls (Jonass) came and passed me. I tried to stay with him and that’s what I did. With one lap to go we hit lappers and I stayed behind so I couldn’t fit with him on the last lap but I did a really good job. I was pretty happy with my second place.

In the second moto, the track was terrible, it was so tough. I took a good start and was behind Covington on the first lap, I passed him doing the quad. I don’t know I just rode good lines and I was smooth so it was a good win. I’m very happy with the win.