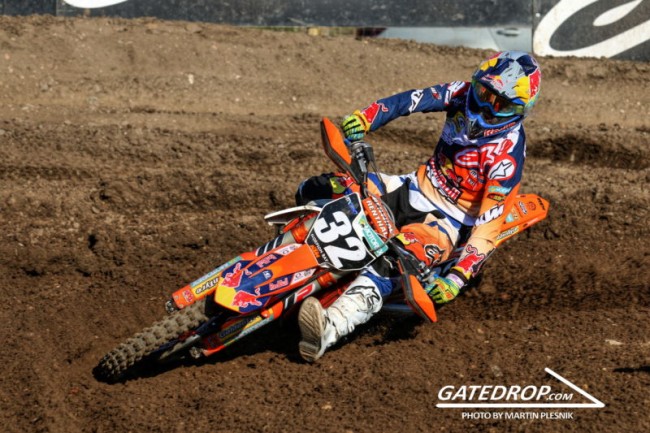 With Pauls Jonass suffering from concussion during Loket, Davy Pootjes on-going wrist problems making him a doubt for Lommel and no latest on Jeffrey Herlings situation, KTM have decided to promote Jorge Prado to the MX2 class this weekend.

This will be the first GP race of Jorge’s career, after missing the first round of the EMX250 championship due to a collarbone injury he has came back strong and currently sits fourth in the championship. He continues to gel and improve on the 250 machine as the season progresses.

However, Jorge suffered from a crash last week and hurt his shoulder again so he isn’t 100% fit either, it has been a bad few weeks for KTM in terms of injuries.

Hopefully he won’t have too many problems with his shoulder and he can put in a good ride on his MX2 debut. This will be perfect preparation for the 2017 season.

Jorge has also rode the last two Dutch Masters Championship races, he has ran and beat some top GP riders. If his shoulder doesn’t give him any trouble don’t be too surprised to see him run in the top ten at Lommel.

Jorge Prado: “I’m really happy to participate at the GP of Lommel in the Mx2 class.
It was something that I was looking forward to the whole year. It will be a good experience for next year. It’s going to be nice to race in the deep sand of Lommel, the roughest track of the calendar but I love the sand. After the crash that I had last week, it’s going to be tough. My shoulder is not perfect at the moment but I hope I can be ready for my first GP race.”