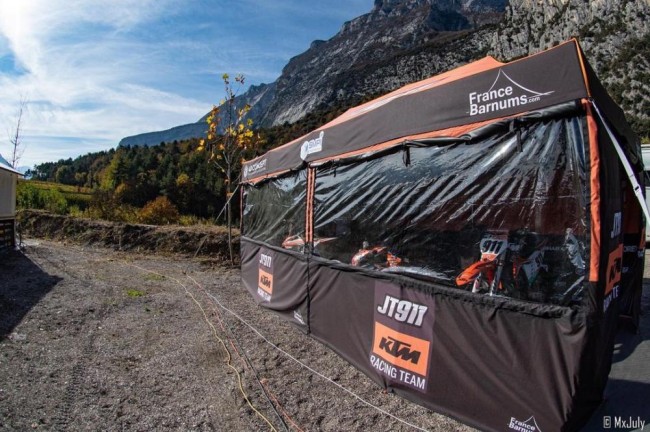 It’s been an eventful year for Jordi Tixier to say the least. A few weeks before the opening round of the MXGP World Championship at Matterley Basin the French rider split with his team at the time, VHR KTM.

It meant that the former MX2 World Champion actually missed the opening round but did ink a deal with Sarholz KTM. Tixier rode round two at Valkenswaard for the German team.

However, over lockdown, Tixier decided to start his own project and start up his own racing team – the JT911 KTM team. Running his own team had been on the back of his mind the past couple of years and he was finally able to put it all together.

“Everything has been going well with the team. It’s been a few years that I’ve wanted to build my own team. I’ve had some great experiences in Factory teams like KTM. I’ve learned a lot and I just want to use the experience that I’ve learned now for my own team and that’s what I’ve been doing. It was not an easy job, there was a lot of things to do and to be honest I didn’t want to make it big. I wanted to make it small and easy to do. It’s important for me to have good bikes. I’ve been doing my best with it and actually it’s working well. The team I have around me is really strong, we are all working one way – to get Jordi Tixier back to 100%”, Tixier told MXGP.tv.

On the biggest differences between being on a team and running his own team, apart from being more work there’s more freedom which Tixier likes having.

“The positives are that I can decide everything I want. That’s the difference between being in a team and being in your own team. If I have some struggles with the suspension or engine, then I can do what I want, this is the biggest difference. To be honest there’s been no negatives because I have such a strong team of people behind me. My girlfriend is there all the time pushing, my Dad and my mechanic doing a great job on the bike. Without them it would not be possible and I’ve also got some great sponsors behind me. I’m lucky I have this team, there’s more work to do for sure but actually I really like it”, concluded Tixier.

For 2021 it’s very possible that Jordi Tixier will have a team mate but it’s yet to be confirmed – we will keep you up to date.