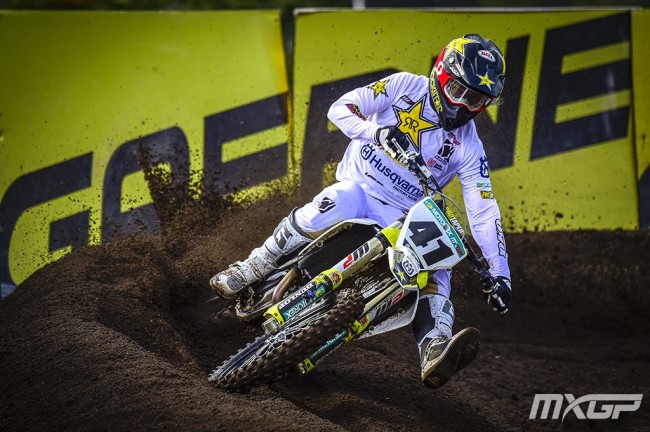 Former MX2 World Champion and MXGP rookie Pauls Jonass celebrated his first podium finish at round five of the series in Italy two weeks ago. The 22 year old was surprised how early his first major rostrum result with the Rockstar Energy IceOne Husqvarna arrived in the wake of a rushed winter period. “This was like my first GP because the first four were like pre-season races!” the Latvian said.

While delighted to give Kimi Raikkonen’s team it’s first trophy since the Grand Prix of the Netherlands last year, Jonass was able to talk about the difficulties of coming into his maiden season in the MXGP division while dealing with the delay of his right knee rehabilitation; the result of a prang with former teammate Jorge Prado at the 2018 Grand Prix of Turkey. His comments in particular about refining the FC450 highlight the depth of the transition from MX2 to the premier class.

“At first I loved the bike in training but when I started to get up to speed and tried to go faster and faster then I started to understand how the small details really count,” #41 said. “With the 250 you just put the maximum power and you go for it. With the 450 it’s doesn’t work like that. The more I ride the more complicated it gets…but its good, I like it and it’s a big challenge for me. It is nice to learn and get more experience.”

Quizzed on specifics Jonass said: “The suspension setting, engine settings and the engine configuration: you can do whatever you want. It’s quite crazy compared to the 250. The suspension means a lot. With the 250 you can squeeze the bike and hammer it, with this bike it’s not so easy.”

Added to the mix is his evolving physical condition. Jonass claims his knee is not yet 100% after ligament surgery “sometimes I feel it is getting tired or it is not so strong but otherwise it’s good: I can train and ride properly” and is targeting the second half of the summer to show yet more potential. “The intensity is so high in the MXGP class and it is hard to go that fast for 35 minutes,” he says. “I need to learn. Midway during the season I want to be in my top shape and then build up.”