John Adamson to contest EMX250 in Lommel on a two stroke 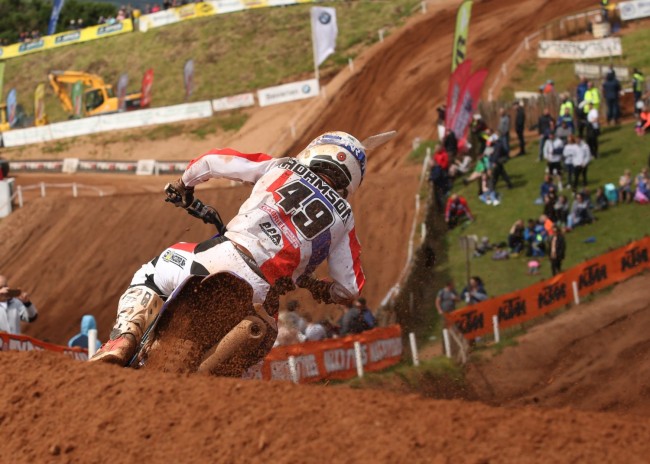 Scottish talent, John Adamson has been having a good season in the MX1 Maxxis British Championship as he currently sits tenth in the series.

Adamson will take on another challenge this weekend, however, as he’s secured a wildcard entry to compete in the EMX250 championship at the deep sand track of Lommel. Adamson will compete on a two stroke!

Adamson is 23 years old so this is his last chance to compete at the EMX250 or MX2 level so it’s nice to see him get the chance.

“As a boy you always dream of riding GP tracks so when the opportunity arose I couldn’t say no. It will also be good to get a chance to race against the best 250 riders in Europe”, stated Adamson.

“Obviously I would like to be up the front but as this is my first European race, I don’t really have any expectations. I’ve been out practicing in Belgium on the 450 and know there are a lot of fast riders in this group so I don’t want to speak to soon I’ll just let my riding do the talking”.

“Its been a long road to get to this position and I feel like I’ve got everything I need to show my true potential. Many sacrifices have been made but it all seems worth it now looking forward to finishing the season strong and having an even better 2020”, Adamson added.

“I cant thank Simon at Gabriel Insulation services enough for the opportunity to ride for his team. It’s a great bunch of guys who have all been very welcoming. Benn and Fred at Benn coffin motocross services have been extremely helpful getting me comfortable on the Yamaha and preparing my bike throughout the week and at weekends. Also, Sam Gabrial and Ross hill for driving me about and setting and packing up at the weekends. It’s a team effort and very grateful for all the hard work everyone puts in to allow me to ride my bike”.