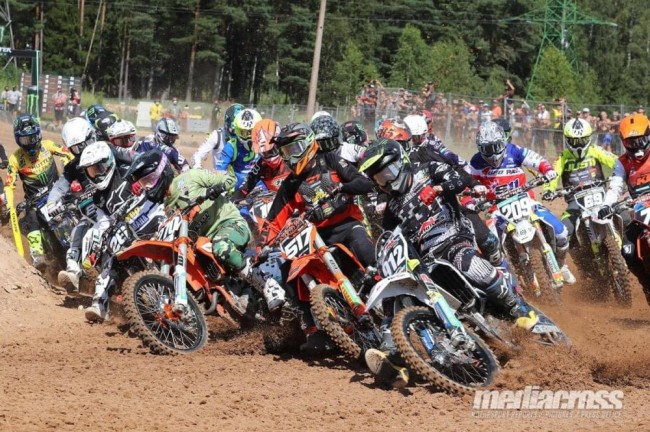 Young British talent, Joel Rizzi is focusing on the EMX125 championship this year but is also contesting his first races on the 250cc which will help him for his future. His first MX2 race came at the MX National at Hawkstone Park – not exactly easier racing in the fastest 40 format alongside the MX1 riders.

During the weekend with no EMX125 championship in action, Rizzi took the opportunity to race the EMX250 championship making his debut in the class and he showed some good pace. Qualifying top ten in his group just 2.5 seconds off sand specialist Kay de Wolf was a good start to the day.

Rizzi got good starts on his RFX by PAR Homes Husqvarna and was running top ten in the moto’s – in the end he ended up 18-17, to score points in such a competitive class on his debut is encouraging.

“My first EMX250 race is done and it was only my second race on the 250cc. My results in the moto’s were 18-17 which is decent – I’m quite happy to score points. I’m feeling a lot better and looser heading into the next round and have set my goals higher so I’m looking forward to what Tuesday holds”. Rizzi told GateDrop.com.

The track was rough for the second EMX250 moto but Rizzi enjoyed the conditions and is now looking forward to the third round of the series on Tuesday.

“The track was tough but I really enjoyed the track, the heat was the toughest thing to deal with”, concluded the young Brit.