JJ Luisetti stays within the sport! 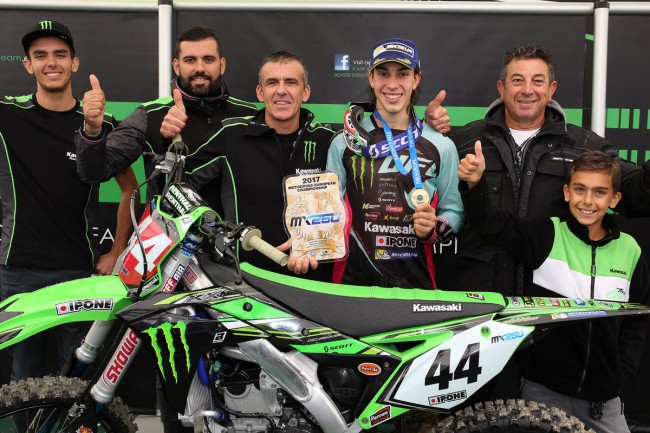 Owner of the KRT MX2 Team (former CLS) and familiar member of the paddock since more than a decade, Jean Jacques Luisetti turned a page in his life as Kawasaki stopped its involvement in the MX2 World Championship. Just after celebrating the European title of Morgan Lesiardo in the last GP of the season, the French manager starts another career.

Involved since always in the motorcycle world, as one of the main French dealer in Marseille (best European dealer for Kawasaki during 18 years) and later with team CLS since 2004, Jean Jacques Luisetti had mixed feelings during the final round of the 2017 Championships, happy to offer a title to the team partners and sad to make a break with his team. “The season ended pretty well with the title of Morgan Lesiardo, and we are proud to offer this title to our partners and Kawasaki. It’s our first International title, and also the last one for the moment as we have to stop our team activities. Monster stopped its involvement in the MX2 class so the Kawasaki factory had to make choices, and they decided to privilege the MXGP so we have no other solution than to accept this decision. I’ve been working since nearly three decades with Kawasaki as a dealer and later with the team, and we claimed many success, winning GP’s in the MX2 and MX1 class so I have many good memories from all those experiences,” he said.

The team will not be in the paddock next season, but Jean Jacques Luisetti will continue to share all his experience from racing through different activities. “First, I hope that the team just stop temporary and will be back in the future. Next year I will put all my experience to help some riders as an agent (Petar Petrov, Iker Larranaga, Stephen Rubini, Morgan Lesiardo, the Miot brothers, Thibaut Maupin or Tommy Searle just to name a few), and also to help several teams. Some of our partners want to stay involved in racing, and ask me to provide them advices so I will be a link between riders, teams and sponsors as I know pretty well this racing world. I will also work with the 613 company, importer of racing and off-road parts through their web site www.proracingservice.com and also importer of electric bikes (Kuberg and Tacita). I will help them to find new suppliers, and to develop their sales on internet. So 2018 is a transition year, and of course I hope to be able to come back with the team as soon as possible’ he concludes.

Maxime Desprey 4 in the EMX250