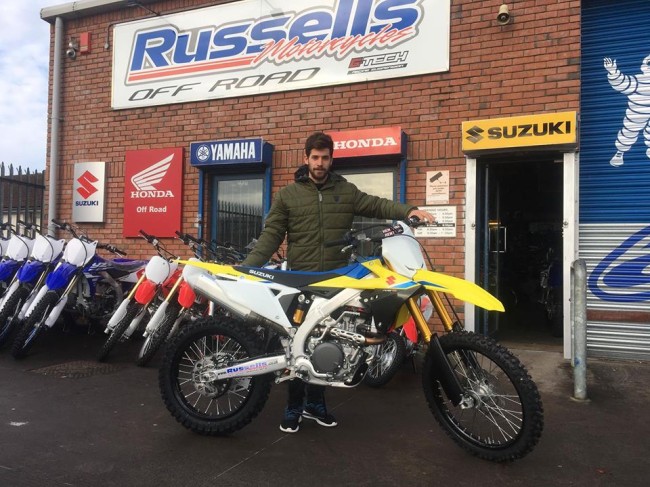 Jim O’neill will be back on a yellow machine for the 2018 season. O’neill has spent the last few years with the VMX KTM team and rode a 350cc KTM this year.

However, the Irish rider who improved a lot over the course of the 2017 season will now switch to a Suzuki 450cc in 2018. O’neill has a history with Suzuki as he was with the MotOne Suzuki outfit during his youth days.

Now O’neill is a bit more experienced and has secured support from Suzuki GB and Russell Motorcycles for the year ahead. He will compete in the Irish and Ulster Championships as well as the MX1 British Championship after competing in the Two Stroke class in 2017.

O’neill also plans do to a few MX Nationals next year if he has the finances available to do so.

Jim O’neill: “I suppose I’ve always been a Suzuki fan at heart. My plan was always to race a 450 next season because of the British tracks being ripped so deep the 350 was at a big disadvantage. For the last few races of this year I switched to a KTM 450 to see how I would get on but I never really felt comfortable on it.

I rode the Suzuki 450 around Magilligan 2 weeks ago and felt comfortable on it straight away so I started talking to Aaron at Russells to see if Suzuki UK would be interested in doing anything for me. Thankfully they were and we were able to agree on a deal relatively quick.

My goal for next year is to win the Ulster and Irish championship and be a regular top 10 guy in the British.

I’d like to thank my mother and father for all there help over the years and Graeme Vigors at V4training for his continued support, Suzuki UK, Russells Motorcycles, S.O.N.C. Concrete cutting and everyone else who helps me out.”