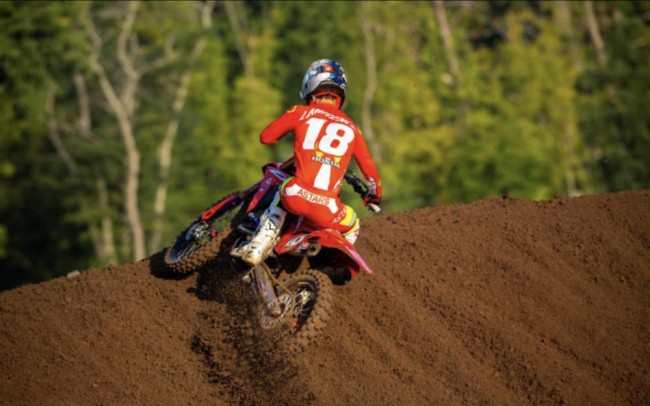 Jett Lawrence has given a very interesting assessment of the tracks in Europe and the USA, the style and the differences between the EMX and US Amateur system plus his respect for Kay De Wolf when talking to Cooksey and Rob Beams.

Jett Lawrence: In Europe, there are some amazing tracks there. You have so many tracks in France and Belgium, you have so many in a 30 minute radius and to me they smoke the American tracks. In America everything is prepped nice, they are all man made and big jumps and in Europe, they are more natural track, got in a tractor and just ripped up a little loop. I find it is better for learning and learning a flow and that stuff. A lot of tracks I rode on a 85. I really liked Lommel, you had to slip the clutch a lot on the 85 to keep the revs up! There are a lot of sucky days in the winter, but also some fun days for sure.

100%, I’ve said it before, the tracks in Europe make you a better rider. I don’t want to diss the American amateurs and I am sure there are some great riders, but I am sure most of the European amateurs would beat the American amateurs. Just from being there and experiencing it. They are riding a lot rougher and gnarlier tracks and the training thing is totally different, they are training 20-minute motos and the American amateurs are riding four lap sprints to try and qualifier for Loretta Lynn’s. It isn’t their fault, that is just the program. I don’t think it is the best and I am glad I only had to do one amateur year in America, because if I had to do more I would have flown back to Europe, because it’s definitely a lot better learning curve during the winter and stuff. The funny thing is I think even the local bandit who just rides Lommel at the weekend for fun has a higher skill than the American or Australian amateur riders. They are riding tougher tracks and they have to learn fast.

The main one (rival in 80s) would be Kay de Wolf, I raced him a lot the only person who used to catch me and start to be on my level was Kay de Wolf so I had mad respect for him, you can see how he got to where he is now on the Rockstar Husqvarna team.

The lines in Europe are way better formed than at the AMA Pro races. At the GPs they open their lines, more like race car racing lines and at the Nationals they suck, because they go from one turn, and they put it on a string and go straight to the next turn and it just creates terrible lines. It’s more like a supercross track (in US MX), you turn, point and go and I think that has crossed over to Outdoors.

Podcast! Jonathan McCready and Andy McKinstry discuss the French GP and the great battle between Jeffrey Herlings and Romain Febvre. Listen on Spotify or YouTube below or get it on iTunes here.