Jeremy Sydow on his ADAC Youngster Cup victory in Mölln 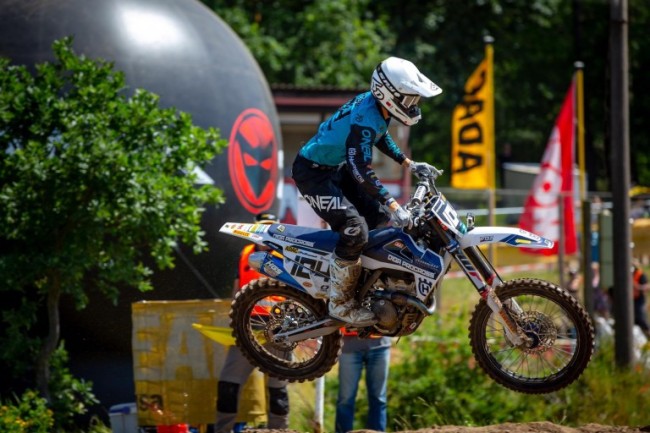 On the last weekend in June, the 3rd round of the ADAC MX Masters took place in Schleswig-Holstein Mölln.

In the first race on Sunday Jeremy Sydow got a very good start and was in the lead after the first lap. In lap four, however, Sydow had to relinquish it, but was able to follow his opponent directly at the rear wheel and take the lead in lap 7 again. This lead brought the young Saxon sovereign with a gap of 13 seconds to the finish. Filip Olsson came back in tenth place from the first lap and fought his way up lap by lap. Already in lap five Olsson was in fifth place and could defend this until the 12th lap, before he was displaced to sixth place. At the end of the race Olsson saw the checkered flag in sixth place.

The start of the second race was not optimal for Sydow. Nevertheless, he managed to conquer the third place in the first round and follow the leading duo on the rear wheel. In the second half of the race Sydow decided to finish the safe third place and not exceed his limit in the hot temperatures. Due to technical problems in the pre-start, Filip Olsson could not contest the second race.

In the daily standings Jeremy Sydow secured the day’s victory with places one and three and Filip Olsson finished 14th.

Jeremy Sydow: “I did not feel really comfortable on the track on Saturday but I still managed to secure 3rd place in my group. In the first race I was able to take the lead in lap one. I was briefly overtaken but the leader made a mistake and I was able to win the race by 13 seconds. In the second race, I drove the race to third place. I knew that this place was enough for the overall victory and did not risk anything.“

Filip Olsson: “It was a good weekend for me. Already on Saturday with fifth place in my group I was very satisfied. In the first race, I was able to stay in fifth place for a long time and finish the race in sixth place. Before the second race I had technical problems, which prevented me from starting the second race and was very annoying”.

Justin Amian: “I am very happy with the performance of both athletes. I am particularly pleased that Jeremy celebrated his second win in a row and is closely following the championship leader after he missed the first round of the season. Filip Olsson also showed a great race in the first Moto and finished sixth with his best result of the season. We now have 3 weeks to prepare for the next race in Tensfeld and we want to build on the results from Mölln”.