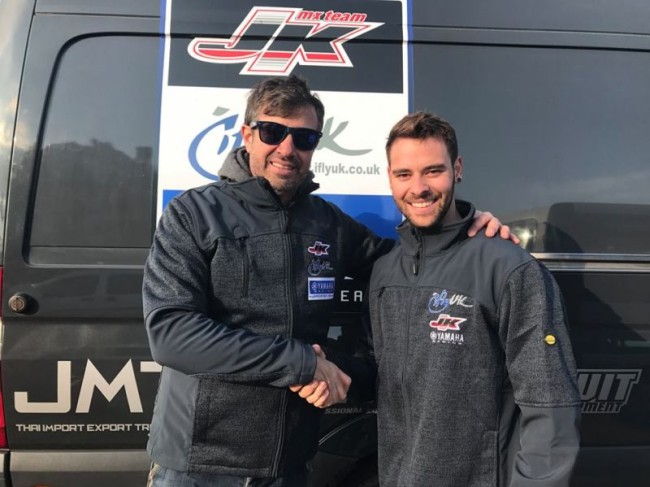 The i-Fly JK Yamaha Racing Team are pleased to announce that 2015 Australian and 2015 New Zealand MX2 Champion Jay Wilson will join forces with the team in the MX2 category for the 2017 race season, committing to the full MXGP World Championship and the Maxxis ACU British Motocross Championship.

22-year-old Wilson, who is currently competing in the UK Arenacross series for the i-Fly JK Yamaha Team was recently offered the opportunity to fill the vacant MX2 position for the 2017 race season, and given his previous achievements with Yamaha, Wilson was the perfect fit when searching for the team’s second rider.

Wilson, who’s lifelong goal has been to race the World Championship, says that he’s pinching himself that his dream has come to fruition, and is looking forward to lining up at the MXGP for the very first time when the series commences in Qatar on February 25.

“I can’t really believe that I’m finally going to be racing the MXGP’s with a manufacturer that I’ve had so much success with in the past. I’ve definitely been pinching myself the last few days that’s for sure,” Wilson shared.

“When I arrived in the U.K the plan was just to race the Arenacross and then to come home. The team spoke to me after the first couple of weeks of being here about racing MX2 and then everything fell into place really quickly.

“I’ve been out testing with the team at Montecatini in Italy where they’re based this week, and from here forward it’s really going to be about putting in a lot of hard work every day until round one in Qatar.

“This has been my lifelong goal, and I’m really grateful that I’ve been given this opportunity. I can’t wait to see what myself and the i-Fly JK Yamaha Team can achieve together this year.”

Echoing Wilson’s enthusiasm is i-Fly JK Yamaha’s Team Owner Riccardo Boschi who made comment on the team’s recent signing of the Australian whilst testing together at Vada in Italy.

“It’s been a busy couple of weeks putting the deal together with Jay at the last minute, but we believe he is a perfect fit for our team, and we are looking forward to the season,” he said.

“This will be my 17th year at the MXGPs and we enjoy being able to give these opportunities to young talented riders like Jay.

“I’m sure we will have a long and exciting season together.”

The Team’s UK based Team Manager Dickie Dye also made comment on the signing of Wilson to the i-Fly JK Yamaha Racing Team, and says he’s looking forward to an exciting year of racing.

“We are very fortunate to have Jay as part of the team for the 2017 race season,” Dye shared.

“It was a twist of fate which created this situation, and we are all determined to make the most of it.

“While Jay continues to focus on the UK Arenacross for the team in the next few weeks, he is also busy getting race-ready for the first MX2GP in Qatar.
“With the outdoor season looming, Jay will test the water a little in the Hawkstone Park International in February.”