Jasikonis on Ottobiano: A few things I need to keep working on 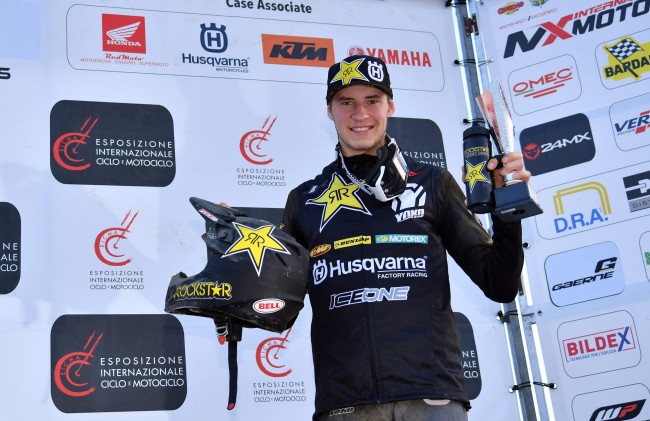 Competing as Rockstar Energy Husqvarna Factory Racing’s sole rider due to his teammate Pauls Jonass being unable to race through illness, Arminas Jasikonis has claimed a pair of third place results at the second round of the 2020 Internazionali d’ Italia MX series in Ottobiano, northern Italy.

Just one week after the series’ opening event in Sardinia, where he also claimed a strong third-place result in the Supercampione final, Jasikonis maintained his impressive form in Ottobiano as he continued his preparations ahead of the opening round of the 2020 MXGP World Championship.

With the soft and choppy Italian track much to his liking, AJ soon found himself with work to do in the opening MX1 class race. Not getting the best of jumps from the start, with a rider moving across on him as he raced down the first straight, Arminas rounded the first corner mid-pack. Cautiously working his way forward, he completed the first lap in eighth but with the leading riders comfortably ahead.

Sitting in fifth midway through the race, AJ kept pushing hard. Able to find many good lines around the technical and rutted track he moved into third on lap 10 where he stayed until the chequered flag.

The combined 250 and 450cc Supercampione final started in almost exactly the same way as the MX1 race for Jasikonis. Completing the first lap in seventh after a cautious opening lap, he moved into fourth on lap four and set about chasing down the riders ahead. Staying notably closer to the leaders, in catching and passing Arnaud Tonus on lap 12 he moved into a podium position and for the second week running rounded out the Supercampione final in a well-deserved third place.

Jasikonis’ teammate Paul Jonass was unable to compete at the second round of the 2020 Internazionali d’ Italia MX series due to illness. The former MX2 World Champion is set to return to competition at next weekend’s final round of the championship.

Rockstar Energy Husqvarna Factory Racing’s Arminas Jasikonis and Pauls Jonass will return to action on February 9 at the third and closing round of the Internazionali d’ Italia MX series, at Mantova. On the same weekend, MX2 class riders Thomas Kjer Olsen, Jed Beaton and Kay de Wolf will head to the Hawkstone Park International in England for their first outing of 2020.

Arminas Jasikonis:“I’ve really enjoyed today’s racing. I’m pleased with the results I got, and that for the second week we’ve finished on the podium. This series moves on pretty quickly week-after-week, so it’s good to get another two solid motos in the bag as we build towards the first GP. It’s always tough to know how hard to push, especially during the opening laps of the Supercampione race. When you’re mixed in with the 250s all the lines on the track get used, so you have to be really aware of what’s going on. I was maybe a bit too cautious, I could have been closer to the front if I’d made some quicker passes. But also I didn’t get caught up with anyone, I rode pretty safe. I got bumped a little off the start of the MX1 race, so I had a sketchy moment on the start straight. I didn’t get a great jump and was pretty far back after the opening corners. I was a little slow in the opening laps but then I felt good. I had a small crash with three laps to go, but third was a good result. The Supercampione final was a bit the same – not a great start, cautious on the opening laps, but then good. I picked up my pace and pushed hard to the end, so it was good to get third. There’s still a few things I need to keep working on, which I’ll do this coming week, before the final round.”