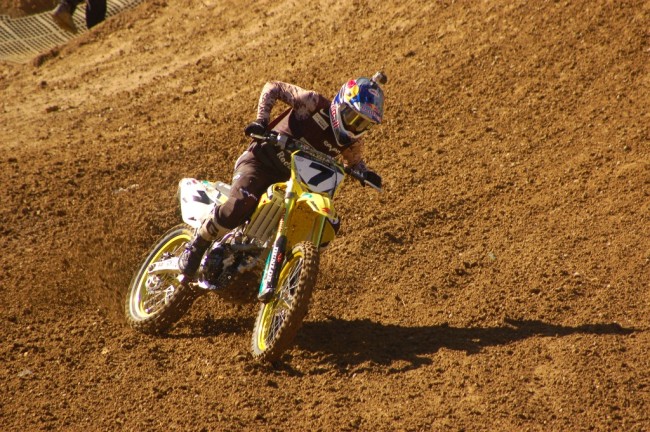 James Stewart has admitted he is not surprised that Ryan Villopoto is not dominating the World Championship.

Speaking to Steve Matthes on the Racer X podcast, Stewart said that he expected it so be difficult for Villopoto against tough competition on very different tracks that he is used to. But he also said is now a big fan of VIllopoto and is cheering him on in the GPs!

“I thought I would never say this, admitted Stewart, “but I actually became a fan of the guy. i think I know why he went over there, for the the change and whatnot because he was bored over here. When you watch him at some point I felt bad for him, because he was struggling. It wouldn’t look good for the Europeans, even though they are fast as hell, (even if they put their chest protector under their jersey and look weird) but thise dudes are fast, I know it from going over there for the Motocross Des Nations.

“When Villopoto went over there, if the guy rode like he does here he would win, but there is no way those guys will let an American come over there and just dominate it the first time he sees those tracks, I had that in the back of my mind.  When I watch him and I watch his motorcycle, and he stalls off the gate, which I have never seen of someone on his level, I saw all these things and I found myself cheering for him – for this guy to win!

“As far as what he is doing (results) I kind of expected that to happen, those guys are really good, the tracks are really different than what we have and you can’t run that set-up with a stiff front end that he runs. And it would be the same thing if I went over there – it’s just different. I think he will get better but as far as him dominanting those guys? No, I don’t think that’s going to happen, at least not this year.”

You can listen to the full wide-ranging interview  with Stewart on his ban, to rider safety and his goal of winning the 2016 supercross championship here: http://racerxonline.com/2015/04/06/btosportscom-racer-x-podcast-james-stewart.