Jacobi ready for his home GP 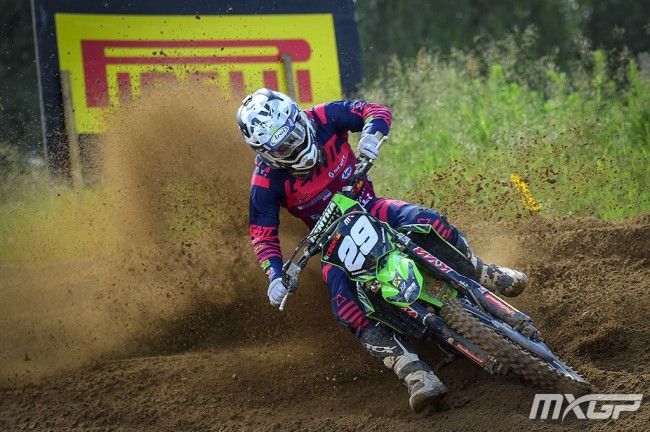 For the fifth and final time Henry Jacobi will line up this weekend in the MX2 class of the FIM World Motocross Championship at Teutschenthal, a place always special for the F&H Kawasaki rider.

A “home” GP is always a special one for a rider, but for Henry racing in Teutschenthal is even more as it’s the place where he discovered the Motocross World Championship when he was a kid. “We live only one hour from there and, as always, I have many friends and family members who will come to watch the GP so I will have a lot of fans behind me,” says the best German rider of the moment who is currently fourth in the MX2 world standings. “It’s the area where I grow up when I was a kid, and we went to Teutschenthal every year with my father to watch the GP. When you stand around the track there’s always a special atmosphere here as you can hear the crowd when you’re in this kind of bowl; we always had good German riders so this place was always really loud, and when I was a kid I dreamt to be one of the actors one day! So racing there now is always special for me,” added the likeable Henry who remembers how everything started some years ago. “We live only ten minutes from the Roczen family and that’s where everything started. My dad and Ken’s dad are good friends; my dad was selling oils and that’s how they met; my first bike was one of Ken’s old bikes! Ken started to ride on a little bike built by his father, and when he jumped on a 50cc bike my dad put me on his old one and that’s how it started.”

This weekend Henry will enter the MX2 GP for the fifth consecutive year, and it will also be the final time as he will have to race the MXGP class next season due to the age limit ruling. Starting the season with a second overall in Great Britain, the F&H rider is of course looking for another podium at his home GP. “Usually Teutschenthal is one of my best races, and I hope I can do that also this year. I want a podium there, as I do every weekend of course, but sometimes things don’t go as you expect and that’s frustrating. I know I can be on the podium almost every weekend, but I’ve been only on the box one time so far; we need to have everything fixed to make it happen, and especially some good starts,” he added. Last season Henry recorded one of his best performances of the season there (5th and 8th) and of course he will do his best and hopes to put the German flag on the podium. “Since my first appearance there in 2015 it has always been one of my best races of the year, but it’s the first time that I come as ‘best German rider’ as Nagl is injured and a lot of people expect good results from me. That will put some pressure on me for sure, but this is positive pressure!”