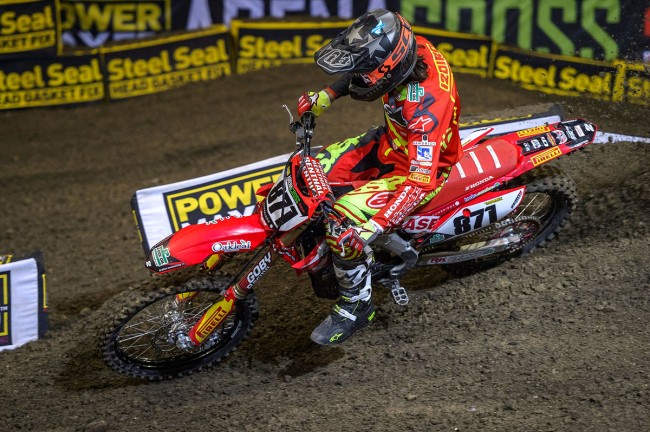 After three rounds Charles, winner of the opener in Manchester a fortnight ago, remains tied for the Pro series lead with his fellow Frenchman just two points adrift in third. Buildbase Honda also hold n a clear nine-point lead in the Team Championship.

On a slick and stony surface, Charles never looked entirely comfortable in his heat races on his CRF 450 R and ran 8-5 after a crash in his opening heat to just make it through to the point-paying races as promoter’s choice. Fabien, the 2014 champion, did not fare much better and and scraped through to the Main Event with 6-5 finishes but as a result had a poor gate pick.

When the going got tough the pair got going and fabien battled through for third and second consecutive podium finish while Charles’ fifth maintains his position at the top of the Pro points table.

“Another podium but it was a difficult night,” said Fabien. “I only just qualified for the Main Event and finished fourth in the Fast Lap so did not get any extra points from that.

Third is not my favorite position but on I do not want to bad and the first lap was good good – I was close to the podium and when I moved into third I decided to stay safe and did not push anymore. I’m not happy but, but, I ‘m still on the box. “

Charles was relieved to progress to the final and fought hard all the way to the flag to salvage a solid score.

“It said a good feeling on the track – the dirt was very hard and stony,” he said. “In heat one I crashed and in heat two I finished fifth and in the head-to-head LCQ races I crashed again but made the main event as the promoter’s choice.

“After a bad start in the final I pushed on the first lap and finished fifth. I’m not happy but it’s good for the championship and I am co-leader for the next race.

Team boss Dave Thorpe was quick to accentuate the positives from what could have been a costly night for his riders’ championship efforts.

“Before the Main Event everything that could go wrong wrong for us did go wrong from the moment Fabien hit the gate to Thomas crashing,” he said. “It was just like it was was going to be our night.

There was a lot of crashes around them but they stayed cool and, in the circumstances, produced great results to keep us in the hunt.

“They say championships are won on your bad days and I hope today is one of our bad days. Before the Main Event I thought tonight could turn out to be a disaster but in this sport you never know.

“This morning the track had waste but the organisers did an unbelievable job in the afternoon. It was good to see.”