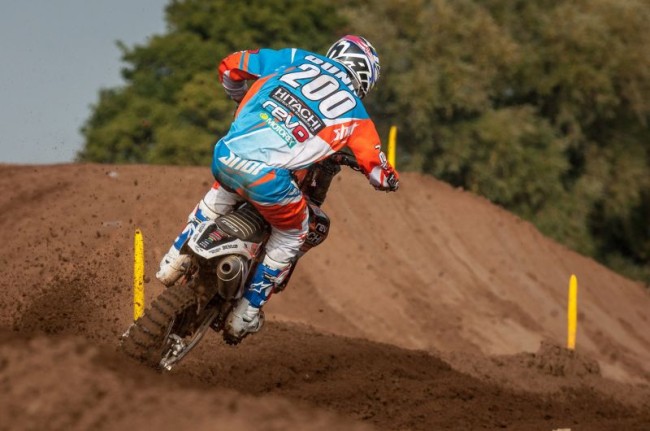 Last week it was announced that James Dunn has re-signed with the GL12 KTM outfit. We can now confirm that Dunn will contest the full EMX250 series on his two-stroke!

At the last round of the series this year, James Dunn made history as he became the first two-stroke overall winner in the EMX250 series. In 2018 Dunn will now contest the full series so hopefully he will be able to add a few more wins to his name on the two-stroke.

It’s set to be a busy year for Dunn as he will also contest the British Two-Stroke Championship and he will surely go into that series as one of the heavy favourites for the title.

The Brit will also contest some additional MX National races in the MX2 class now the series have decided to allow two-strokes race with the four-strokes. If he can fit in any EMX300 races in during the season then that might also be an option.

However, before the outdoor season even starts Dunn will race the AreancrossUK series when it gets underway in January.

The landscape of European and World Motocross sponsorship has changed dramatically in the last few years. Instead of teams being supported by the factories and the large industry players most are now left to self finance and rely on small amounts of support from many smaller sources. Getting a package together to be able to provide seats for my riders this coming season has been unbelievably difficult. Now I am in a position to be able to let GL12Racings two strokes loose on the world for another year is a great relief and I intend to enjoy it as much as possible.Thank you to everyone who believes in what we do.

I am really excited to be riding for Bob and the GL12racing team again next year, the amount he has helped me over the past year is appreciated hugely and I’m sure he is looking forward to next year as much as I am. It is great to be able to work with Ade Phelpstead again also!

The EMX250 championship is one of the biggest championships to be doing in the world so it’s going to be a big challenge, I’m keen to carry my momentum from this year into next and have a consistent year. I aim to be battling for race wins and podiums in any race I’m competing in!