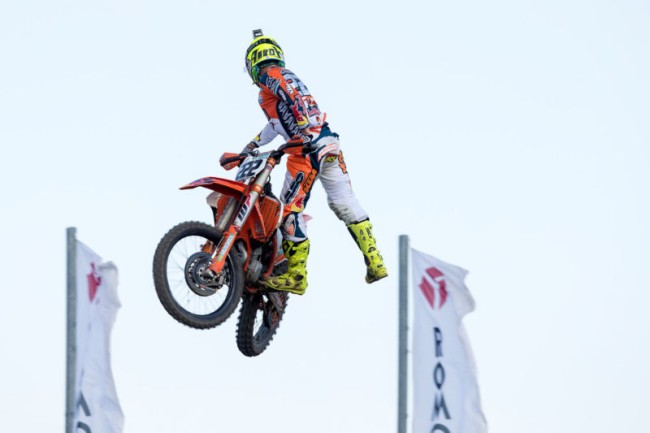 Set in a wide glacial valley guarded by the karst peaks of the Brenta Dolomite Mountains and nestled on the shores of the wind rippled Lake Garda, the MXGP of Trentino in Pietramurata is one of the most loved stops on the calendar. The track is rock hard clay, stony and has loads of elevation as it rips up, down and around the hills based at the bottom of the Dolomites. The first round of the FIM Motocross World Championship to take place at this extraordinary venue was back in 1987 and they have since had six rounds with this weekend being the seventh as it will host the eighth round of the 2016 FIM Motocross World Championship, as well as the fourth round of the European Championship EMX250 and the second round of the European Championship EMX125 Presented by FMF Racing.

Last year, Tim Gajser, MXGP’s rookie who snatched the red plate from Romain Febvre last weekend, won the MX2 grand prix here fair and square, even with an uninjured Jeffrey Herlings on the line. Meanwhile in the premier class, it provided some of the most captivating racing of the season as all of the top cats went bar-to-bar, quite literally. Gautier Paulin had some misfortune, Clement Desalle crashed, while the most memorable occurrence on that day was the season ending crash of American legend Ryan Villopoto who got an unusual case of whiskey throttle and broke his coccyx. All the drama aside, Max Nagl wound up the grand prix winner, ahead of Antonio Cairoli and Clement Desalle.

Red Bull KTM Factory Racing’s Antonio Cairoli finally got the monkey off his back last weekend with his first grand prix victory in almost a year. It’s been a long and winding road back to the top of the box, but the eight-time world champ did it! This weekend, the Italian legend will be on home soil although that doesn’t really count as an advantage for him, as one of the most popular riders in the world he is normally run off of his feet with media events and signing sessions. Even so, Cairoli loves his fans and one of the best feelings in the world must be blasting the Italian national anthem from the top of the box for the thousands upon thousands of fans that come out to watch him do business.

The red plate will be firmly bolted to the number 243 Honda Gariboldi beast of Tim Gajser for the second time this year. Gajser is nothing short of sensational at the moment; he rides so close to the edge you almost have to watch through squinted eyes because when his bike steps out, he’s riding so fast it makes your heart stop briefly. What is more amazing than his super flamboyant style is his consistency. He’s the only rider to have finished on the podium at every round this year. That’s seven from seven and he’ll be looking for number eight this weekend.

Meanwhile Monster Energy Yamaha Factory Racing’s Romain Febvre has been having a little bit of a rough spell over the last couple of rounds. The Frenchman crashed on the opening lap of race 1 last weekend and couldn’t regroup enough to salvage the red plate. Nevertheless, he is one of the grittiest riders on the line and you can bet your boots both barrels will be loaded and ready to fire this weekend.

If he has returned to full health after being under the weather at his home grand prix last weekend, last year’s winner Rockstar Energy Husqvarna Factory Racing’s Max Nagl will be a threat to the podium.

Meanwhile Team HRC’s Evgeny Bobryshev will be relying on the power in his legs to control his FMF powered Honda this weekend while he fights through the immense pain of a shoulder injury. The Russian is determined to be on the line at every round, chipping away at the guys in front of him, he was the poleman last year after winning the qualifying races, so the 777 has the pace to run up front on the hard Italian soil.

Also, Monster Energy Kawasaki Racing Team’s Jordi Tixier will make his long awaited return to racing which will also be his MXGP class debut as well!

Red Bull KTM Factory Racing’s Jeffrey Herlings lost fair and square to Tim Gajser here in Pietramurata last year and if we base his speed on last weekend, it might not be a straightforward steamroller style win that we had almost expected of the MX2 phenomenon. The number 84 has a target on his back and that target gets bigger and bigger with each passing lap, it’s up for The Bullet to remain cool, calm and collective out there while everyone else is riding on edge, hungry to beat him.

Monster Energy Kawasaki Racing Team’s Dylan Ferrandis has been missing for more than half of the season, but since his return has already gone from a top five finish to the podium. He’s still not race fit so the more he rides, the more we can expect from him.

As for Team Suzuki World MX2’s Jeremy Seewer, now he’s cooking with gas! That dude was on it last weekend. He caught everyone off guard including Herlings. He was riding with some serious fire, so let’s hope that that fire is still raging this weekend as he goes for his seventh podium finish and maybe a race win.

Things have got to start coming together for Rockstar Energy Husqvarna Factory Racing’s Max Anstie. The Brit runs a top three pace and is more than capable of being there every weekend. Right now it just seems like he hasn’t started his puzzle by piecing the corners and flat-edged pieces together first, hopefully he’s got that done now and he can start putting together a decent season.

Every one knows that the French thrive on marbled clay and elevation, which makes Kemea Yamaha Official MX Team’s Frenchman Benoit Paturel a possible cat among the pigeons. Paturel is one of those guys who is there lingering in the shadow. He had a break out performance last year in Mexico when he landed on the podium for the first time in his career and since, it’s been a mission to get back.

Last but not least, it’s a home race for the young Italian star on the rise Samuele Bernardini. Bernardini has been the surprise of the season this year! He somehow manages to pull near holeshots on the TM Racing Factory Team TM (that’s a mouthful), and has put in a few impressive performances. He’s knocked on the door of the podium a couple of times already, it would be incredible for the young Italian to hit that milestone here in Pietramurata for the fans.