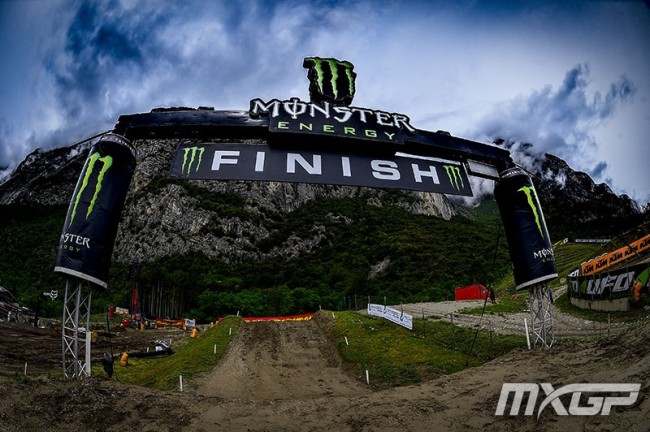 It started to rain heavy before the start of the MX2 moto, the riders had a muddy track to deal with! Dylan Ferrandis and Jeffrey Herlings were banging bars around the first couple of corners of the qualification race as they start to form a rivalry. Ferrandis had some pressure from Jeremy Seewer early on in the race but responded well from the Swiss man’s pressure.

Dylan was able to take his first moto win of the year, that will do him the world of confidence! It will help give him belief that he can start doing it on a regular basis.

Seewer, Herlings and Jonass formed a nice battle for second place but that was the way it stayed at the chequered flag.

Max Anstie had a lonely ride in fifth until the last lap when he made a costly mistake and dropped back to seventh position. Aleksandr Tonkov and Samuele Bernardini were the two riders to take advantage of the Brit’s mistake.

Italian fans had plenty to be happy about – three Italians in the top ten. Bernardini finished in sixth, Michele Cervellin with his best ever qualification race to end up in eighth position. MX2 wild card Simone Furlotti had a storming ride to cross the line in tenth position.

Gariboldi Honda’s Tim Gajser grabbed another hole-shot, his starts have been so impressive this year! He didn’t look back and cruised to another victory.

Meanwhile, Romain Febvre had a shocking start, outside the top thirty! His starts could cost him the world title at this rate, they haven’t been good enough this year. His speed, however, was very impressive. He managed to come from outside the top thirty to finish sixth after Van Horebeek put up a good fight before Febvre capitalized on a mistake from the Belgian.

Max Nagl and Antonio Cairoli had drama-free races finishing second and third respectively, they will show more tomorrow and attempt to go for the win.

Bobryshev who is riding with some pain held on from Kevin Strijbos for fourth. It’s great to see Strijbos starting to ride like his usual self as he is starting to pick up his form.

Gautier Paulin and Jordi Tixier are back racing at the GP’s, they ended up eighth and thirteenth respectively.

The 125 riders had the first session off the weekend that was quite a muddy track so by the time the gate dropped for the first moto they had much better conditions to deal with. They had the best race conditions of the day!

It was French man Pierre Goupillon who grabbed the hole-shot on his KTM. It didn’t take the championship leader, Jago Geerts long to get into second and challenge for the lead. On the second lap he made the move and controlled the race from the front. Three wins from three for the impressive Belgian.

There is no question that Stephen Rubini has the speed to win races but he just needs better starts! He was sixth on the first lap and rode well to finish in second on his Silver Action KTM.

Italian, Facchetti rode brilliant on his De Carli Racing KTM and looked comfortable in second before a mistake cost him. He still managed to finish third at his home round, a very good ride.

Another impressive ride was from Swedish rider, Isak Gifting. He had a good start and crossed the line for fourth, he is a name to look out for as the season goes on.

Roan van de Moosdijk and Zachary Pichon suffered from bad starts but rode well to come through to finish fifth and sixth respectively.

The last race of the day saw the EMX250 boys in action and they probably faced the hardest track off the weekend!

It was Jorge Prado who took the lead on the first lap, he only returned to action at the last round but he is already impressing in the class and his starts are fantastic! He led for about half the moto before Thomas Kjer Olsen, the championship leader took the lead from the Spaniard.

Olsen rode great out in front and had a winning margin off six seconds at the chequered flag. It was all going on behind him though!

Prado, Sanayei and Lawrence formed a fantastic scrap for second place.  Lawrence was definitely the quickest but he made so many mistakes, any time he would make a move he would then crash and lose the position again.

A delighted Jorge Prado crossed the line in second, it’s hard to believe this kid is still only fifteen years old. Sanayei just about held off Lawrence for third place.

It hasn’t been a great start to the series for 2015 champion Nick Kouwenberg but he was much improved today crossing the line in sixth, he is capable of much more!

Heading in to tomorrow we are in store for some good battles – it will be interesting to see what the weather does overnight as it will play a big role in the track condition for the main race day.