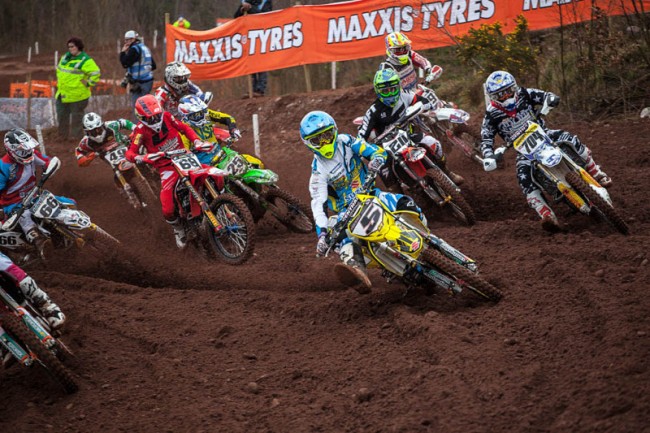 The Heads and All Threads Suzuki team headed to the West Midlands and Hilton Park for round one of the ACU British Championship, where after a red flag, and a long delay, time had slipped away and the officials decided to continue the event with only two races for each class.

Aboard the RM-Z450 in MX1, this was Graeme Irwin’s first event of the season, and it wasn’t an ideal start.
After qualifying in 9th, the first race saw Irwin take an impressive holeshot, only to be taken down by another rider shortly after the first corner and was left with a lot of work to do, but managed 9th across the line.
Irwin was left toward the back of the field in race two after a bad start. He was pushing in the early laps, but washed out and had it all to do again to cross the line in 11th, taking 9th overall

“It wasn’t a great start to the season. I was taken down in the first race, and had a really bad start in the second.
My speed was good, it’s just frustrating when some things are out of your control.
It is what it is, we’ll make a few changes, and look to improve at the next round.” — Graeme Irwin, MX1 #5

In MX2, both Harri Kullas and Gary Gibson showed good speed, but suffered with bad starts in both races.
Qualifying was a difficult affair as riders struggled to find a clear run on the short, sub two minute track, with Gibson in 27th and Kullas in 17th.
In race one, Gibson was forced to retire with an electrical fault, and while Kullas didn’t get the jump out of the gate, he recovered to finish in 10th.
It was a difficult start to race two for both Gibson and Kullas, but they were laying down impressive times. Gibson was pushing all the way to the line, took 23rd and 28th overall,  while Kullas managed to climb back into 10th to end the day in 7th overall.

“For me, I’m used to the longer races, these are really short so you need to be up there from the first lap. I’m not complaining, it’s just different, and something I need to adjust to. The overall was OK, and I’m pretty happy with my riding. I made some cool passes and my speed was good. There were some mistakes, but it’s the first race, and we just need to work on a few things.” — Harri Kullas, MX2, #51

“I didn’t get a good gate pick out of qualifying, and then suffered with a DNF in the first race. I picked my way back through the pack in the second race, but just missed out on some points.
I felt I had good pace, and if I can get a good gate pick and good start, I shouldn’t be too far away from the top 10.” — Gary Gibson, MX2, #4

“I was quite happy on Sunday. Obviously we wanted to go there and get better results, but we were just unlucky, and had some bad starts.
There’s no question for me about Graeme and Harri’s speed, they can run top 5. They were both making good laps times coming through the field, they just need to get the start and stay out of trouble..
Gary was unfortunate in the first race with a technical problem, and didn’t get the start in the second, but he battled hard all race. If he can get the start, there’s no reason he can’t get some decent points.” — Neil Prince, Team Manager