Irwin and Mewse impress in 2018 season opener at Hawkstone 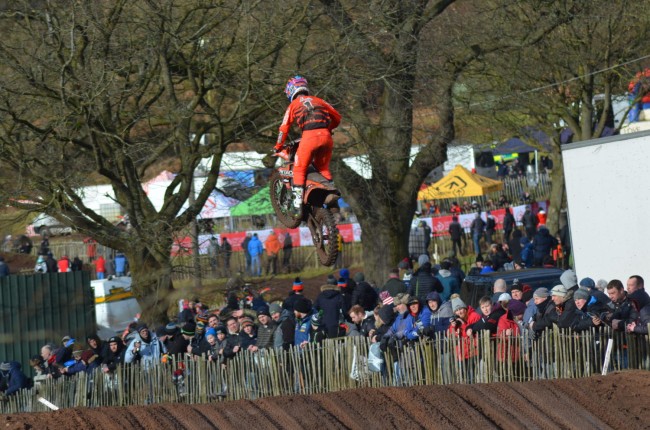 PR- The new look Hitachi ASA KTM UK motocross team made its first appearance of the 2018 season at the Hawkstone International on February 11 with an excellent showing by riders Graeme Irwin and Conrad Mews in the MX1 and MX2 classes, respectively. Irwin was nipping at the heels of the MXGP factory bikes in both races and Mewse made the podium.

The power-sapping sandy Shrewsbury circuit is the unofficial season starter, attracting MXGP Factory teams as everyone prepares to get up to racing speed ahead of the long year. For the Hitachi ASA KTM UK team, it was the chance to show off its fresh livery and all-new rider line-up, with two very determined racers coming hot off a dedicated winter training programme.

Aside from a late flurry of snow, the weather held for the riders and big crowds of spectators, but after qualifying the infamous Hill section was taken out of the lap due to the riders complaining of a lot of stones flicking up, making the relentless rutty track even harder for overtakes.

MX1
Irwin joins the successful KTM team as reigning British MX1 champion, bringing with him ASA Scaffolding as a major sponsor. The 26-year old will spend the year on the KTM 450 SX-F, defending the no.1 plate in the UK series and taking on the world’s best in MXGP.

After posting the seventh fastest time in qualifying, this meant very little with the track layout changed to remove the Hill section, but the Carrickfergus rider was feeling confident. Race 1 saw Irwin and his no.1 plate KTM 450 SX-F finish in 5th, behind the two factory Red Bull Factory KTMs of Jeffrey Herlings and Glenn Coldenhoff and the factory Husqvarnas of Max Anstie and Gautier Paulin.

Looking at a repeat performance in Race 2, Irwin collided with a backmarker while in 5th position. Graeme was unhurt and able to remount, finishing a frustrated eighth place to tie him on fifth overall for the day in the MX1 class.

A pragmatic Graeme Irwin said: “The first race result wasn’t too bad, but the gap to the front was bigger than I wanted. I knew I had more, I just couldn’t find that rhythm and speed in the opening laps. The second race was a shame to have the collision with the backmarker. I don’t think I saw a blue flag all day. Anyway, he moved aside for one rider but not me and that was that.

“Although the results aren’t what I wanted the positives from the event is that we’ve got three races under our belt and we leave uninjured. The track is all about the start – without the Hill it makes it even harder to pass – and I know I need to get up to speed faster in the opening laps.

“In Race 2, the only bikes in front were fully factory, so that’s a good sign. But to be fair I want to be closer to those guys. But I can’t fault the team or my KTM 450 SX-F – I just didn’t ride it to its full potential today. We are only going to get better!”

For Mewse, since his 2013 World and British 85cc championships titles, the 18-year old has had a rapid rise through categories and the #426 will ride the KTM 250 SX-F in the MX2 categories of the World and British championships this season. After a winter training programme that the youngster from Shepton Mallet admits he’s worked twice as hard at than ever before, he was eager to show off that preparation to the crowd and his opposition.

After posting the fifth fastest time in qualifying, Mewse then went one better in Race 1 with fourth place – under two seconds from Thomas Kjer-Olsen in third. In Race 2, a slow start gave Conrad a lot of work to do as he dropped to ninth, but his determination was unfaltering as he worked his way through the field for another fourth place – tantalisingly close to third again, being just a second off Adam Sterry at the flag after almost 30 minutes in the punishing sand. The result was enough to give Mewse a podium start to the year with third overall.

Conrad Mewse said: “Overall, we had a really good weekend and that’s testament to coming off a great off-season. I’m really happy. I’ve got such a great team around me and they let me work the way that I need to. It’s all working perfectly and that shows today with three solid races and a podium to begin the year with.

“I made mistakes at the start of both races, making things harder for myself. Maybe I’d have had a bit more energy for the Super Final if not. But even then, I only tired at the end of that.

“The set-up is good; the team is mega and I’ll keep working and improving. We are only going to get even better. Today was a learning day going into a long season. I’ll just keep hitting the motos and the gym!”

SUPER FINAL
The day concluded with the Super Final – pitching the MX2 machines against the bigger MX1 class bikes. Looking to make amends for MX1 Race 2, Irwin spun up badly off the line with the track having dug down to its hard core, getting a face full of mud and MX2 machines in return. Attempting to fight back on a difficult to pass track, he would ultimately run out of tear-offs and steamed-up goggles saw him a frustrated 13th over the line.

It would be Mewse who would enjoy the most success in this combined class as he used the corner speed of the KTM 250 SX-F machine to devastating form to mix it up with the 450cc machines of MX1. He crossed the line eight overall, but the third MX2 bike.

Hitachi ASA KTM UK team manager, Lee Tolan, said: “Both the boys got off to a solid start to the season. It’s nice to see that all the hard work from everyone that has been put in throughout the winter has paid off. Conrad had a fantastic day in both MX2 races, getting on the podium, and finishing strongly in the Super Final.

“Graeme showed his speed, but was unlucky with a crash in the second race with a lapped rider whilst sitting in fifth. But none the less a cracking ride from him and we leave Hawkstone with both riders fit and happy; it’s definitely shaping up to be a season not to be missed!”

The Red Bull KTM Factory rider, Jeffrey Herlings, won the MX1 class overall and the Super Final, while his teammate Pauls Jonass did the honours in the MX2 class.