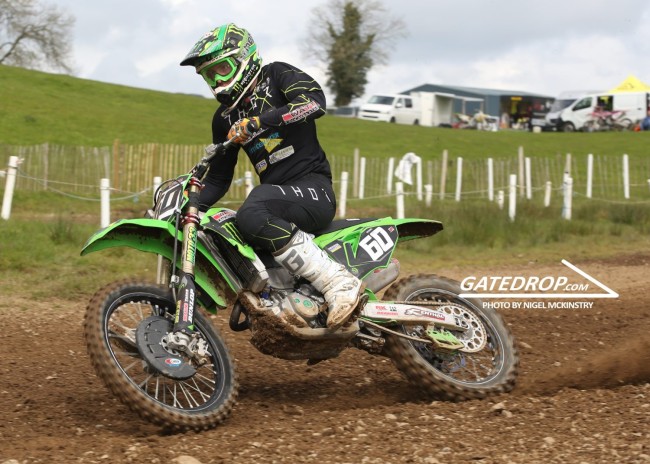 The official National Championships in the form of the MCUI Irish Motocross Championships arrive as far north as they go at the North of Ireland Clubs excellent facility this Saturday 25th May for round three.

The Championship has been fantastic so far in the Premier MX1 Class is led by John Meara by 3 points from defending Champion Richard Bird on his KTM, but the Lisburn man is coming under pressure from Dundonald youngster James Mackrel on his Edgar Electrical Wholesale KTM with Jason Meara Kawasaki mounted like his brother in fourth and Robert Hamilton, ex Irish & Ulster Champion is in the mix on his KTM, and his Ballymoney neighbour Jordan McCaw also newly switched to KTM is on form at the moment

In the Premier MX2 Class, this is certainly the domain of the youngsters with young Dubliner Jake Sheridan leading by 4 points from James Mackrel doing double duty on his Lyons Bros Peugeot 250 Yamaha with Jordan Keogh and David Galvin hot on his heels.

Semi Expert MX1 is led by a Ballygowan’s Aaron Ashton with Sean Laverty only 5 points behind on his two stroke, Lurgan man Gareth Knox is up to third now Gary Marmion and Jack Daly close behind.

Turning to the Semi Expert MX2 class, Crossgar teenager Connor Mullan seems almost unbeatable so far this year on his KTM and leads Dollingstowns William McBride newly Yamaha mounted in second, third is ex Quad Champion Leon Rodgers on his Yamaha making an impressive switch from 4 to 2 wheels, while Jake Hall & Scott Bailey are in pursuit

A healthy field of Veterans also turned out at Tandragee for the last round and the over 45 Veterans Class is led by Paul Heaney on his KTM, from Gary Sullivan on his 500 Honda, while the Over 35 Grade A’s is led by Mark Mooney from Daryl Maguire, Ricky Watt and Jonathan McBride, the Semi Experts is led by Macej Goldyn from Ian Cooney and Jonathan O’Brien and the Clubmen is led by Darren Wilkinson and Martin Thornton.

Racing starts at the spectacular fast circuit near Claudy Village at 11.00, entry is £5 per adult and under 14’s free so come along and see the best racing from the best riders in Ireland.