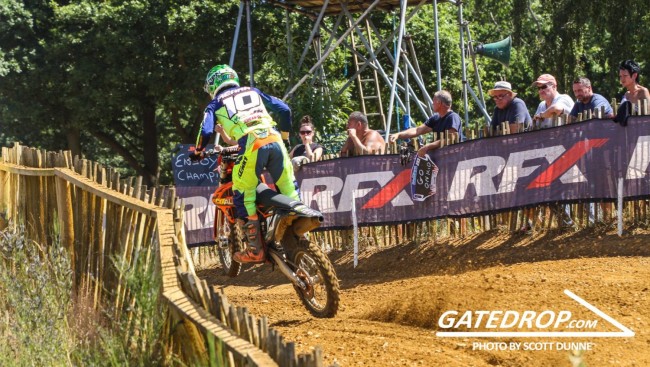 Jason Meara took home the MX2 MX Nationals Expert title with a round to spare by wining all four races at Canada Heights and that was after racing three motos at an Ulster championship event at Seaforde on Friday!

The Loughbrickland flyer will now be able to move up to the pro category and pit himself against some of the best riders in the UK.

Jason said of his achievement: “It’s nice to wrap the championship up a round early even with a DNF earlier in the year. I had my struggles throughout the year but I think I proved I was the fastest guy in the class even with the bad starts.”

Meanwhile in the 85 BW category Hitachi ASA KTM rider, Ryan Mawhinney, took the title for the Hitachi ASA KTM team to underline his potential as a top rider of the future.

Ryan said: “So far in 2018 I have had a brilliant season, I have won the MX Nationals championship which has been the main goal for me this year. I was also competing in British Youth earlier in the year and I was lying in 2nd in the championship until I crashed and knocked myself out at the third round at Fraddon leaving me to remain forced on the Mx Nationals. Having the opportunity to ride for Roger Magee on Hitachi ASA Ktm Uk along with the help of Robert Gibson has help achieve the success this year.”