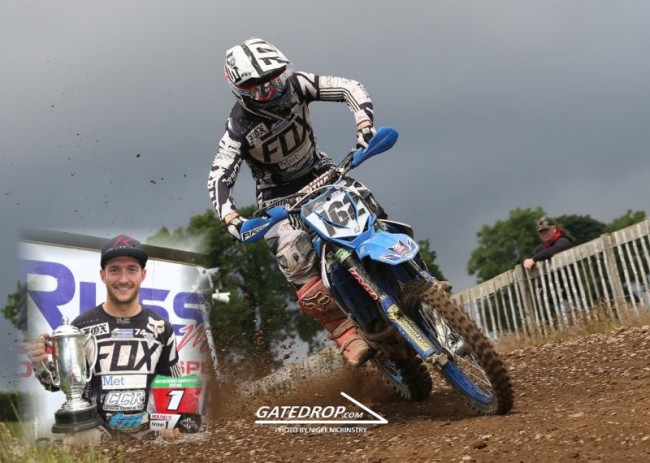 It was time for the fifth round of the Irish Championship as well as the John Donnelly Trophy being up for grabs at Seaforde Motocross track.

Moto One: In the first moto it was Stuart Edmonds who grabbed the holeshot going into the first corner. Good to see Stuart Edmonds race in an Irish Championship again as he hasn’t rode since the first round at Desertmartin, he focuses on racing mainly in England. However, John Meara had a better line going around the first corner and led at the end of the first lap on his Watt Kawasaki.

Behind Meara were Edmonds, fast starting Jordan Scott, Richard Bird, Wayne Garrett and Jordan Keogh as the top six started to pull away from the rest of the field. On the second lap Jordan Scott and Richard Bird collided with each other that gifted Wayne a good but lonely third place.

Jordan Keogh got a great start and hung onto some of the top MX1 riders for a few laps before coming home in sixth place but he was able to take twenty-five points as the first MX2 rider across the line. James Mackrel was riding well as the second MX2 rider on his Risk Racing Yamaha. However, he picked up a puncture which ruined his race. Jason Meara had a terrible start and was right at the back on the first lap but he was able to end up the second MX2 rider at the end of the moto picking up twenty-two championship points.

At the front, john Meara was looking awfully good and Edmonds never really got close enough to threaten the talented Meara.

It would be interesting to see if this was a sign of things to come and if Meara could continue his domination in the Irish Championship or would Edmonds be able to win at least one of the moto’s before the end of the day?

Moto Two: When the gate dropped for the second moto it was Edmonds with the hole shot from Jordan Scott and John Meara. Meara very quickly found his way past Scott into second place, the battle was on once again!

Jordan McCaw got a flyer off a start and led the MX2 battle on the first lap but was quickly passed by Jason Meara who had a much better start. Unfortunately Jordan tagged the back off Meara and went down which put him further down the pack.

There was a fantastic scrap for third position with Jason Meara catching Jordan Scott and he was bringing Garrett and Bird with him. Meara made the move passed Scott for third and was able to finish there from Garrett. Unfortunately, Bird had an issue at the half way point in the race which dropped him back.

James Mackrel was able to put the misery of a first moto behind him and crossed the line second in MX2 and made a move on race one winner, Jordan Keogh on the way to twenty-two championship points.

All eyes were on the front as Edmonds and Meara set a very high pace, no one was a match for them. Meara huffed and puffed but the gap was always in and around three seconds and Edmonds broke Meara with a few laps to go for the race win.

Moto Three: It all came down between Meara and Edmonds in the last moto of the day – the winner would take all, win the overall and the John Donnelly trophy with it. Would there be a surprise in store and could someone else step up to challenge them? One thing for sure is that the start was the key as it proved to be the main factor in the first two races.

It was TM’s Stuart Edmonds who got the hole shot but John Meara was were he needed to be right on his rear wheel. The first corner caught a few off the top riders out as Jason Meara and Richard Bird went down and had it all to do.

Jordan McCaw got another fantastic start and was following Jordan Scott for the first half off the moto in fourth and was the leading MX2 rider. However, at about half way in the moto, James Mackrel made a move for the lead and never looked back. What started out a bad day for Mackrel ended up a great day as he won the overall on the day. Also, it’s nice to see three different MX2 race winners on the day in a competitive class.

Back at the front, John Meara made a mistake on the first lap and lost time to Edmonds and Edmonds just proved to strong on the day. Wayne Garrett made John Meara work for second as he just about held on at the line.

A terrible moto for Jason Meara after his first corner crash he also had a bike problem, James Mackrel has caught up points today which makes for an exciting Irish Championship. Jordan McCaw showed good speed and saved his best moto for the last one of the day crossing the line as the second MX2 machine.

Congratulations to Stuart Edmonds on winning the overall and the John Donnelly trophy and to James Mackrel on the MX2 overall.