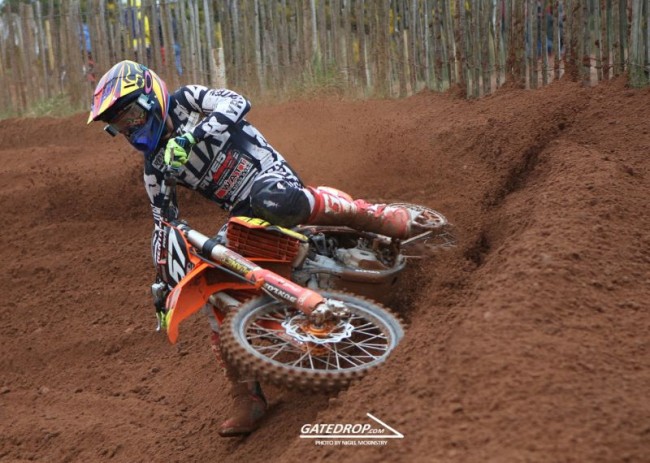 The third round of the Irish Championship hit Desertmartin, the same track that held the first round of the series. It was nice to see Gary Gibson come back and compete in a home race, he currently lives in England but good to see him compete here when he can!

Moto One:  When the gate dropped for the first moto it was Gary Gibson who got the hole shot on his Watt Kawasaki from Robert Hamilton and Richard Bird. Championship leaders, John and Jason Meara had disasterous starts, both possibly outside the top twenty around the first corner! Robert Hamilton was able to stay with Gibson for a few laps but after that Gibson started to pull away, Gibson didn’t have the best off opening rounds at Desertmartin but he looks like he’s slowly getting back to his best. Richard Bird and Wayne Garrett were fighing over third position in the first few laps. However, Robert Hamilton had a problem and Garrett made a mistake dropping him back to sixth. Meanwhile, James Mackrel was leading MX2, Jason Meara pulled in at the end of the second lap with a problem.

John Meara was riding like a man possessed during the first few laps and found himself in third place! He was catching Bird all the time but Bird responded and started to close on Gibson, he just didn’t have enough time, the top three didn’t change at the chequered flag.

James Mackrel rode one of his best ever races on his Risk Racing Yamaha finishing in fourth on his 250 machine, a great ride to stay ahead of the more experienced Wayne Garrett. English visitor, Oliver Benton ended up second in the MX2 class on board his Hitatchi Revo Husqvarna – great seeing him make an appearance in the Irish scene! Jordan McCaw rode great to end up in third when he crossed the line.

Moto Two:  A lot of heavy rain in between the moto’s meant that the riders had a very different and more challenging track to contest with. It didn’t take Gibson long to get to the front but there was a great six rider battle in the first few laps! Not much seperated Gibson, Hamilton, Scott, Meara, Bird and Garrett. However, Gibson was able to put a gap between himself and the rest of the field. But disaster struck on the third lap as Gibson stalled his machine and dropped back outside the top five.

Meara seen this as a chance to win the moto and put pressure on Hamilton for the race win. However, Hamilton responded and put distance between himself and Meara who came under some pressure from Bird. Gibson and Garrett then collided together that ended Gibson’s race. Surely no more drama? Wrong! Robert Hamilton then disappeared from the lead, his collarbone popped out but he managed to pop it back in but that was his day over – terrible luck for Hamilton but hopefully he can be back on the bike soon. Bird had already made a move on Meara so it was Bird left leading the moto and he took the win. Jordan Scott all of a sudden found himself in an impressive third place.

In MX2, Jason Meara and James Mackrel both suffered bad starts. However, Meara was able to show his real class and made a host of passes. By the end of the moto he found himself in third and was comfortably the first MX2 rider across the line. Benton and Mackrel had a race long battle for second place, Benton was just that little bit too strong for Mackrel.

Heading into the second moto it was set up nicely looking like Richard Bird and John Meara would battle for the MX1 overall. In MX2, it was looking like Benton or Mackrel would take the overall.

Moto Three:  Fast starting Gary Gibson got yet another hole shot in the final moto of the day. He had company with John Meara and Richard Bird right behind him. John made a move on the second lap and tried to pull away. He couldn’t make it count though and Gibson retook the lead. Bird followed his way passed into second and the duo pulled a good gap over Meara. Bird tried to close the gap on Gibson but couldn’t get close enough to really worry Gibson. However, Bird took the overall win, he will be pleased getting back to winning ways in 2016 after not a brilliant start to the season. Meara extends his points lead over Garrett in the championship lead so it was a good weekend for him too.

James Mackrel got a decent start and was leading on the first lap. Jason Meara stalled on the first lap and was buried down the pecking order. However, he rode the wheels of the Watt KTM, he was able to reel in and then pass Mackrel to take the win. A fantastic day for Mackrel to win his first overall of the 2016 season and claw some points back in the championship battle.

A good days racing and a shout out to the Cookstown club as it was a well ran event – the racing was over at three o’clock!

Richard Bird (MX1 winner) – “It was a good day for me coming away with 3 solid results and the overall, especially after banging myself up a bit on Monday! I just have to keep the ball rolling now for the rest of season.”.

James Mackrel (MX2 winner) – “Today went good. I was happy with the new bike, I felt more like myself and was more comfortable. I was happy with my first race result, it’s been the best finish so far this season and race two was going good until I burst a water pipe and heat seized the bike but I still got third. I will just try to build from this weekend and hopefully get more results like this. “