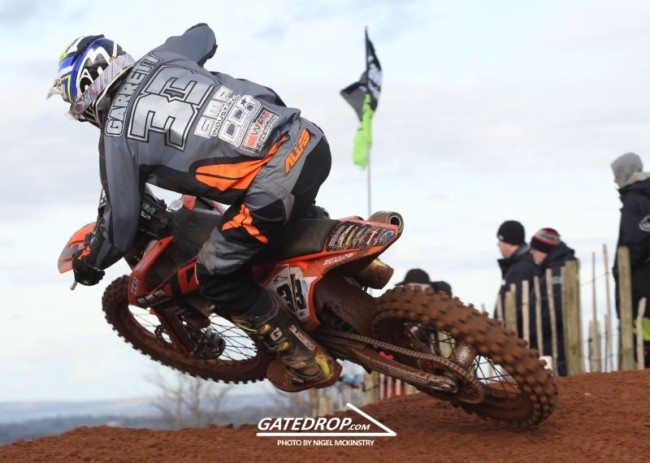 It was the MX2 boys who set the pace during qualifying with Jordan Keogh going quickest from Jason Meara. John Meara was the quickest MX1 rider from Robert Hamilton, Richard Bird and Wayne Garrett.

It was Jason Meara who started the day in fine form as he won the moto on his 250 Watt KTM beating all the MX1 riders, a fine performance. Wayne Garrett finished a strong second and was the first MX1 rider across the line from John Meara. Jim O’Neill impressed with a fine fourth position ahead of Robert Hamilton.

After a DNF in the first moto, Richard Bird made up for it by winning the second moto from Wayne Garrett, less than two seconds in it at the chequered flag! The Meara brothers ended third and fourth with Jason beating his brother by just over a second. James Mackrel rode well for a fifth position and finished as the second MX2 rider across the line on-board his Risk Racing Yamaha.

John Meara made sure that Jason wouldn’t be the only Meara to go home with a victory today as John dominated the last moto.  Wayne Garrett was solid in second to ensure he won the overall on the day. However, John Meara has the red plate heading into round three of the championship. After being so fast in qualification, Jordan Keogh didn’t have the best two moto’s but he was the first MX2 rider across the line in the last race of the day just pipping Jason Meara.

Wayne Garrett(MX1 overall winner): I had a great day at round two of the Irish championship, the track was very one lined and the starts were key today. I felt like my speed has improved since round one and I hope to build on this round for the next race.

John Meara (MX1 championship leader): Today went pretty good, I was feeling fast all day. I had a crash in both race one and race two as well as bad starts so I battled hard to get were I finished. Race three, I started second but dropped to fifth for a few corners before finding myself in second. Once I got into the lead the win came pretty easy. I’m happy to be leading the championship but I know there’s a long way to go. I just have to keep the head down and working hard. Massive thanks to Watt Motorcycles, Pro Performance Fitness, For Runners by Runners, thevisorshop.com, Hogg Furniture, J.irwin Car Sales and MBR racing, Malcolm Rathmell.

Jason Meara (MX2 overall winner and championship leader): Today was good, I had a brilliant first race – got a decent start and won a race outright beating the 450s which is something I’ve wanted to do for a while now.  Bad starts ruined my chances in the next two races but I’m happy with my riding.