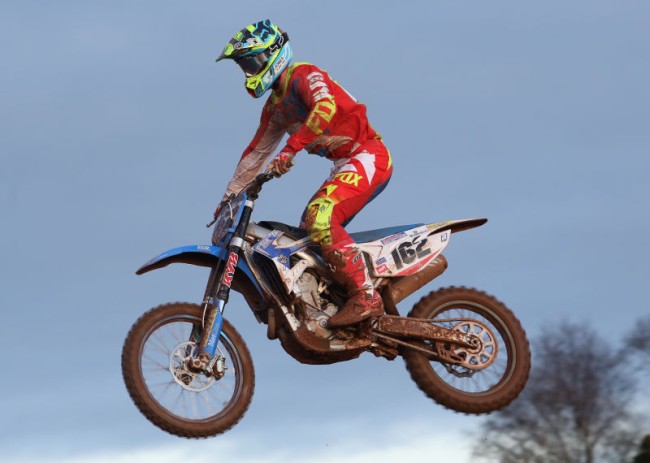 Desertmartin hosted the first round of the Irish Championship in 2016 on Saturday. The riders put in the hard work and now it was the time to see if the hard work throughout winter has paid off. Staurt Edmonds, back on a TM, set the pace is qualifying by setting a blistering pace as he looked great on the bike. He was 1.7 seconds quicker than Glenn McCormick who set an impressive time on his 250 KTM machine.

The Irish Championship is running a new format this year meaning after qualifying takes place the top thirty riders with the quickest times will be in the first group. This means we will always have thirty riders in this race throughout the season and the format worked well at the first round – it was nice seeing some depth again!

When the gate dropped for the first moto, Richard Bird and Robert Hamilton both got good jumps with John Meara and Edmonds just behind. Jason Meara got a good start on his 250 KTM and was leading the MX2 riders on the first lap. It didn’t take long for Edmonds to make his way to the front as by the end of the first lap he was already in the lead with Robert Hamilton and Bird dropping back to second and third respectively.

Glenn McCormick suffered from a bad start but by the end of the first lap he had already found his way to the back of Jason Meara. Glenn actually found his way past Meara in the MX2 battle but Meara instantly responded and got him back again.

Due to heavy rain before the race it left the riders with a challenging track. On the third lap, John Meara made a mistake and went back to fifth. However, Wayne Garrett made a mistake a lap later meaning John was able to reclaim his fourth spot. Jordan Scott was having a good race as he was gaining ground on Gary Gibson for eighth place. However, Scott and Gibson where both the next victims of a tough track as they both went missing allowing Stuart Nesbit into eighth position – a brilliant ride for him!

Garrett on his return to racing! Pic: Nigel McKinstry

With a few laps to go Jason Meara was able to break away from Glenn to finish as the first MX2 machine across the line. John Meara and Wayne Garrett had a good battle throughout the moto and Garrett, on his return to racing after a few years with injuries, was able to make the move to secure fourth place. In the end Stuart Edmonds crossed the line with a comfortable 21 seconds gap back to Robert Hamiltion, Edmonds was looking fantastic on-board his TM.

In the second moto, Robert Hamilton and Richard Bird both got brilliant starts just like the first moto. John Meara, Stuart Edmonds were right there and Craig Browne got a good start as he chased a good result. Jason Meara, Glenn Mccormick and James Mackrel were all locked in a battle on their 250’s which looked like an exciting battle.
On the second lap, Edmonds found his way into second position and starting to apply for pressure on race leader, Robert Hamiltion. A fantastic battle then started to form for fourth position as Craig Brown was under instead pressure from Bird, Meara, McCormick and Wayne Garrett.

Disaster struck for McCormick as he disappeared – it’s suspected that he twisted his knee and didn’t even crash! That was the day over for Glenn as he was in too much pain to race the next moto. Hopefully it isn’t too serious and we see Glenn back on the bike soon.

Craig Browne then slipped back and we saw some good racing between Richard Bird and Jason Meara. They started to approach a lot of backmarkers and that allowed Jason Meara to make a move on Bird for fourth position. Jason then put the hammer down and caught his both in a Meara battle, Jason made the move on him. However, with three laps to go Jason appeared to be coasting – he had a gearbox problem. This gifted James Mackrel with the MX2 race win which will give him a lot of confidence, Meara ended up the seventh 250 machine to get some valuable championship points. Heading into the last moto it was all to play for between Meara and Mackrel for the overall.

Again, Stuart Edmonds made it look easy out in front and crossed the line with twenty-eight seconds to spare ahead of Robert Hamilton. A good race for John Meara on-board his Watt Kawasaki in third position.
Before the final moto all was too play for in the MX2 class and Jason Meara ended up having to use a borrow bike! A great chance for Mackrel to get an overall win. It was Edmonds with the hole shot and he led from Hamilton, Bird, Garrtt, John Meara and Gary Gibson.

On the first lap Jordan Keough was leading the 250’s but he had Jason Meara and James Mackrel right on his wheel tracks. It didn’t take long for Meara to make his move but he then had a massive moment on the borrowed bike which allowed Mackrel to pass him.

On the third lap John Meara and Gary Gibson made moves on Garrett for fourth position. Gibson was not having a good day but he looked a lot more comfortable on the bike during the last moto. Bird then stalled and looked to have a bike problem which cost him a second place.

It was looking good for Stuart Edmonds and Robert Hamilton but then Hamilton made his first mistake of the weekend with a crash – that put him down to sixth behind Garrett and work to be done.
John Meara and Gary Gibson had a race long battle and this left the Watt Kawasaki boys to battle it out for second place. In MX2 it was Jordan Keough and James Mackrel battling for the race win with Meara closing – we had a three way battle at one stage. Mackrel ended up dropping way back to allow Loughlin into third in MX2 and cost himself the overall win.

Back at the front and just when it looked like Meara had pulled away from Gibson he had a massive moment which put the pressure back on. Gibson ended up making the move for second as he started to look more comfortable on the a Kawasaki.

Stuart Edmonds cruised to another victory and took the clean sweep at the opening round. Jordan Keough was the first MX2 across the line from Meara. Mackrel and Meara were tied for points but Meara won the overall due to the better last moto.

Stuart Edmonds and Jason Meara have the red plates heading into the next round at Ferns on the 17th April.
Both, reflecting on their day had the following to say:

Stuart Edmonds – “Really happy, I came here to get extra testing on the track for the British Championship. I am loving how the bike is set up, how everything is going and I am just enjoying it really. The hard work over the winter is starting to show”.

Jason Meara – “I was happy to take the win in the first race. In the second race I was going well but then the gearbox went. In the third race I borrowed a bike, it wasn’t handing great but thanks to Jonathan Merriman for the lend of it. I am happy to come away with the overall win at the first round”.