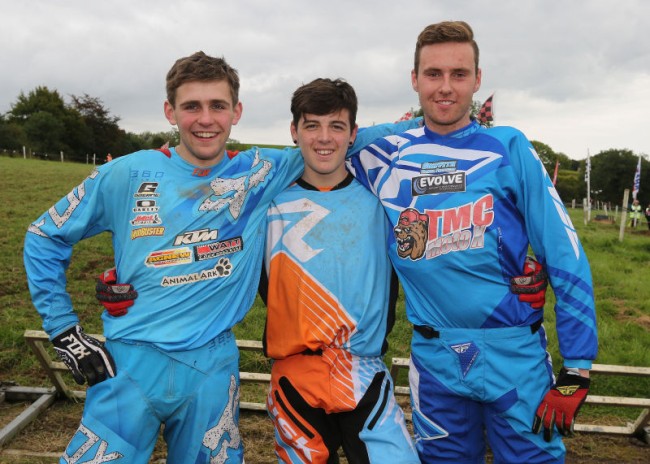 The time has came where its time for countries to start selecting the teams they will send to the Coupe de l’Avenir (also known as the under21 des nations). The event will take place in Belgium on the 3rd and 4th October.

Ireland have decided to send an 85cc team and an open team.

The riders that have been selected to ride the 85cc class are Lee Coffey, Aaron Gray and Conor Mullan. The Couple de l’Avenir is a great event and will give these young kids some great expereince for the future.

The open riders to be selected are John Meara, Glenn Mccormick and James Mackrel.

John Meara wasn’t fit at the start of the season but ever since he made his return to racing he has been growing in confidence and is now battling for race wins in the Ulster/Irish Championships. John also had a 12th place finish in one of the motos at the last round of the British Championship which is an impressive results.

At the start of the year Glenn Mccormick had some great battles with Jason Meara which entertained the crowd. However, as the season has went on Glenn has grown in confidence and has been winning motos on-board his 250 machine beating guys on bigger capacity bikes – Glenn is a big talent! His results in the British Championships have also improved as he struggled to score points at the start of the season but he is regularly in the points now and he also won the MX2 Irish and Ulster Championships.

James Mackrel needed time to adapt to the 250 machine as this is his first year on it – he rode a 125 last year. As the season has went on James looks more and more comfortable on the 250 and he also won a two rounds of the Ulster MX2 championship as a rookie. James also finished second in a moto of the MXY2 championship – it has been a good season for James.

John Meara – “It feels really good to be selected. I’ve had a tough year getting back up to speed from breaking my wrist in February but I feel now I am riding the best I have in quite a while. Representing Ireland at any event is a huge privelage and hopefully myself, James and Glenn can do our country proud. I feel we have a really strong team and hopefully we can push for a podium finish. Also, a big thanks to everyone who is funding to take the team to the event”.

Glenn Mccormick -“I am pretty happy to be picked, cool to get the opportunity and can’t wait to get stuck in, we have a good strong team. Hopefully we can do well, have fun and see how we finish up”

James Mackrel – “I’m excited and privileged to be part of the team and most of all to be representing my country. I’ve had a tough start to the year with injures and bike problems but at the minute I feel like I’m going the best that I have since the start of last year. I think that we have a strong team with myself, Glenn and John. I feel that we could maybe be pushing for a podium finish, well that’s what we will be hoping for”.

Gate drop would like to wish Ireland all the best for the event!