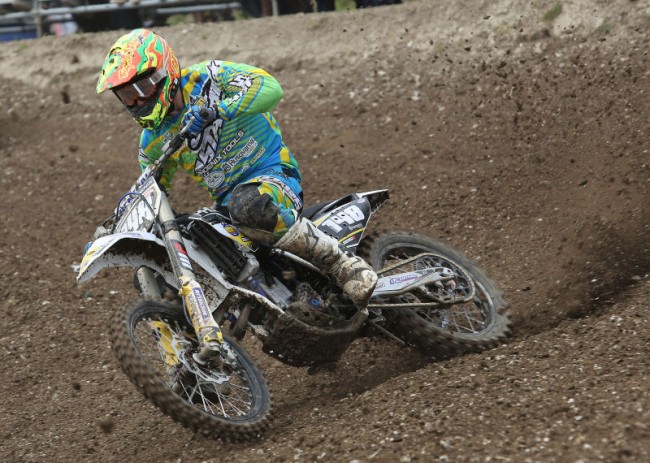 Last year it was Micky Eccles first season riding the British Championship and EMX250 championships for Silver Action KTM. It took a while as rookies always need time but half way throughout the season he started riding to his potential and being in and around the top five, which was impressive for the rookie!

This year he is riding for a British team again as the Pheonix Tools iFly Husqvarna Team decided to sign him.  Things haven’t gone quite as smoothly but we still think he is going under the radar with his performances, he impressed during the EMX250 round at Matterley Basin. Micky is definitely one for the future and look for him to start getting some top five results in the British when it starts to click for him.

Gatedrop caught up with Micky to discuss this season so far as well as his career so far.

Gatedrop: Last year you rode the EMX250 championship for Silver Action, it must have been cool experience to ride for a team like that?

Micky Eccles: Yeah last year was cool, riding for the team was okay but in the end we just ended up doing our own thing really and I feel things ended up better that way.

Gatedrop: You must have learnt a lot from last year?

Micky Eccles: I learnt a lot last year as it was my first year in the pro class and I learnt that I was able to run up the front end and be right there with the top guys in the class!

Gatedrop: You are not long out of the youth, how does racing British MX2 compare to the youth championships?

Micky Eccles: The British mx2 class is totally different to the British youth scene to be fair, there are many riders from all over Europe. I would say it’s one of the hardest championships there is in a country.

Gatedrop: Have you been happy with the season so far?

Micky Eccles: This season hasn’t gone good at all, I feel that I have the speed to be running up front and challenging the top guys, just like I was doing at the end of last season. We’ve struggled with the engine all season long, I actually rode my race engine from last year in Italy when I finished 6th and since then I’ve been on many different engines trying to get it like last season but still haven’t managed to. I’m positive that when we sort the engine out I will be doing what I’m capable of and where I want to be.

Gatedrop: Is it nice to be back riding for a British team again?

Micky Eccles: yeah, for sure it’s nice riding for a British team again, the team is awesome and contains a good environment to be in at the races.

Gatedrop: The EMX250 round at Matterley Basin went well for you, you must have been happy with the speed?

Micky Eccles: Matterley was great considering my season so far and the situation we find ourselves in. I went back to my 2013 engine again for this race and managed a 11th and a 12th from bad starts and finished 9th overall.

Gatedrop: How does racing the EMX250 championship compare to just riding the British Championship?

Micky Eccles: The emx250 class is hard, I mean there is sixty to one hundred riders turning up to qualify each weekend, there is also about fifteen riders that could win a race on their day, so yeah it’s a hard class. However, the British isn’t an easy class so there is good competition at both championships.

Gatedrop: Have you got a goal you would like to achieve before the end of the season?

Micky Eccles: Definitely, my goals are to be back to where I was last year and be in around the top 5 mark. I know I’m capable of it and when we have things sorted I’m positive I will be back up that front end of the pack.

Micky would like to say thanks to his mechanic Wes for all the hours he’s done swapping motors this year and so on. His trainer Pete for his hard work, girlfriend Megan for everything she does, Mum and Dad for all the effort they put in and all the Pheonix Tools iFly Husqvarna Team for all the hard work.