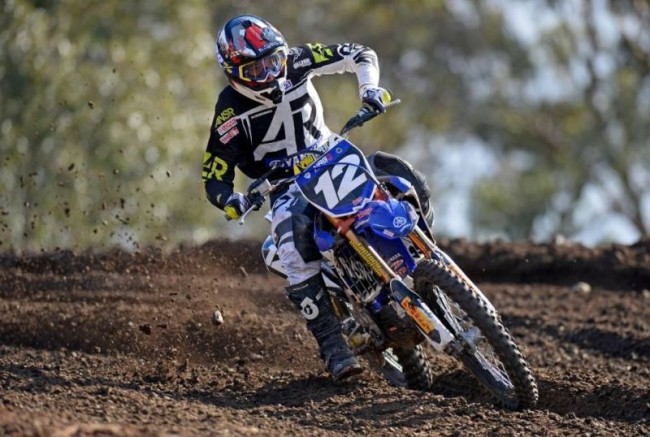 Australia have a new talent on the block in the form of Jed Beaton. Jed rode the rookies in 2014 but made the move up to the pro class this year and he has been putting in some good results – he even had the red plate at the start of the season. The Serco Yamaha rider then picked up an injury which hindered his season but he still fought through the pain barrier and rode the rounds.

Jed wants to keep learning and is keen to come and ride the EMX250 championship or the World MX2 championship as soon he gets the chance. Gatedrop caught up with Jed to discuss his season so far as well as his plans for the future!

Gatedrop: Last year you rode the rookie class in Australia, how did the season go for you?

Jed Beaton: Yeah the season was off to a good start, I had the hold of the red plate (series lead) for the first three rounds. At round four I had my appendix out a week before the race, I finished 4th overall still but that was a bad weekend and I lost the red plate. We then had the six week mid-year break to get healthy again and at round six I got the red plate back, I was holding the series lead until the second last round. I was doing a local race and had a really small crash and fractured my lower leg, so my season started good but ended bad!

Gatedrop: This is your first season in the pro class, how does it compare to racing the rookie class?

Jed Beaton: Yeah this is my first year, I find it really good. I like the longer moto’s and there is a bit more competition, the racing is good and you always seem to be learning something new every weekend.

Gatedrop: The first few rounds went awesome for you..

Jed Beaton: The first round was really good for me, from there to round four sort of went downhill, round three was my only half decent round just with the other rounds having small crashes in the first laps caused by bad starts so it’s completely my fault on those results.

Gatedrop: Did you expect to be so fast coming into the season?

Jed Beaton: Yeah I expected to be up there, I put in a lot of hard work off and on the bike before the season started and just really tried to work on all the faults I had in my riding.

Gatedrop: At the fourth round, I understand you broke your collarbone but still did the next round?

Jed Beaton: Yeah I had a small crash in the second corner of the first lap and was dead last trying to work my way through the pack, I made my way back to eight position. When I was trying to go for seventh I clipped the back of another rider and landed straight on my shoulder which ended in a broken collarbone, I had it plated the next day and was on the mend so I could race round five which was two weeks later. I rode round five to the best of my ability on that day I went 5-9 for equal sixth overall.

Gatedrop: That shows you are a pretty tough guy and motivated to do well..

Jed Beaton: Most of all I just want to win, I want to be in this championship and I want to do well for all the effort I put in. I didn’t want my title contention be out the window half way through the season and for all the people that support me I wanted to show I want it just as bad as them.

Gatedrop: You’re still not far off the championship lead, you still think it’s possible for you to win?

Jed Beaton: Yeah, I defiantly think it’s possible. Thirty-six points out of the championship lead and to look back at the first five rounds anything can happen, I’m going to be fighting as hard as I can for this championship.

Gatedrop: Have you got a goal you would like to achieve before the end of the season?

Jed Beaton: I would defiantly like to win the mx2 title for motocross and supercross.

Gatedrop: Have you any Supercross experience being from Australia? Do you prefer it or motocross?

Jed Beaton: I have had a little bit of experience in supercross but I much prefer motocross. I like the more wide open flowing tracks with only a few jumps, it seems you spend more time in the air than on the ground in supercross haha.

Gatedrop: Your team mate Luke Clout got to ride the nations last year, you must think you have a chance to go this year?

Jed Beaton: That is like a lifetime dream for me. To go represent my country at the biggest race in the world, I would love to go, but there are a couple of guys that are already in Europe and the top mx1 guys that could get picked before me but I can only hope to get chosen!

Gatedrop: Have you got any plans for next season yet?

Jed Beaton: I’m still unsure, more than likely stay with the team I am on to prove myself even more, but I would defiantly like to make my way to Europe as soon as I can to learn the major difference between Australia and Europe.

Gatedrop: Do you have any plans to come race any EMX250 or MX2 races in the near future?

Jed Beaton: Yeah that is my plan to come race EMX250 or MX2, I just need the opportunity to get over there and do it!

Jed would like to say a huge thanks to everyone at the Serco Yamaha team as they support him no matter what and are always behind him! Yamaha Australia for their continued support, older brother Ross for everything he does, including living with him for free, coming to the track with Jed and pit boarding and all the effort he puts in to help with his riding, technique and speed. Also a big thanks to awesome Mum and Dad for their support!