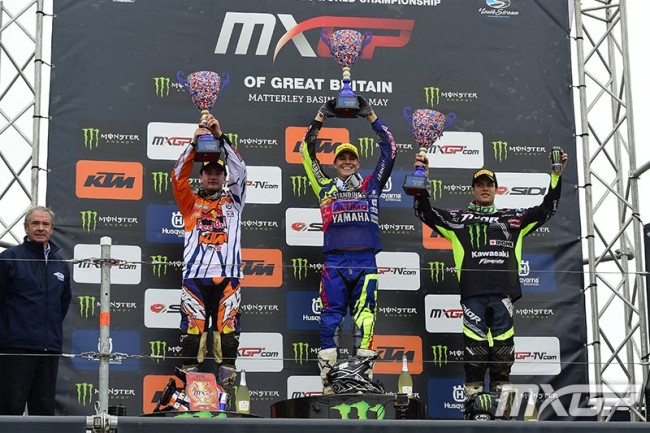 Valentin Guillod did it again! And the smiling Swiss has now won two GPs in a row and was even more impressive with this win in Britain than two weeks ago in Spain.

The Standing Construct Yamaha man won the qualifying heat and caught and passed Jeffrey Herlings and Jordi Tixier to do it. In race one he spent all race trying to pass Max Anstie only for Herlings to pass them both in two turns and nick the win with Guillod taking second.

But race two was the best ride of Guillod’s career. He was sensational and beat Herlings straight up even passing the Dutchman back when Herlings made an early move for the lead. Each time Herlings upped his lap time, Guillod would respond the next lap and even set his fastest lap of the race on the penultimate lap to keep Herlings’ final charge at bay.

One of the nicest guys in the pits, Guillod spent time as he walked back to his truck signing autographs and shirts with a big smile on his face and even had enough energy left to chat to gatedrop about his brilliant win.

Gatedrop: Two GP wins in a row and brilliant riding all weekend from you!

Guillod: Yeah it was a great weekend. I really like this track, we have a track in Switzerland that is a bit the same and I really like that style. From the beginning of the weekend I was feeling really good even from free practice. I won the qualifying race and I showed I had the speed so it was a great Saturday.  On Sunday I say I was not going for the win but to take some good points for the championship.  In the first race I had a good race with Max fighting with him all race, I tried to pass him sometimes and he pushed me but anyway it was racing and it was a great race. In the second moto in the first corner I took the lead then Jeffrey tried to pass me but I passed him back directly and until the end I tried not to make a mistake and that is what happened it was really awesome.

Gatedrop: On the Saturday you passed Herlings and Tixier to win did that give you even more confidence?

Guillod: Yeah a little but I keep fighting and working hard. I really want to thank the Standing Construct Yamaha team they are working really hard to make the best bike and it shows that hard work pays off for a good results.

Gatedrop: In the first moto Herlings passed you when you where trying to pass Anstie for the lead, was that really frustrating?

Guillod: Yeah I was really pissed at Max because I passed him clearly and I was inside then he cut the track and went out of the track and went directly inside the corner so I was a bit pissed. Jeffrey passed me straight away then, ok it’s racing but it was frustrating.

Gatedrop: Herlings passed you in moto two as you said but you got him straight back, there are not many people have passed  him back and held him off. Every time  Herlings upped the pace so did you, that was really impressive.

Guillod: Yeah, I try you know? I’m not scared about Jeffrey, I know he is the best rider in the world but if I can fight a bit to show him I am here then it’s cool for me, cool for the team and cool for the fans.

Gatedrop: Are you going to make it three in a row next weekend?!

Guillod: We will see! But no, I will keep my feet on the ground and keep working. We will see happens, I will go to take some points, the level is really high. Like I said after Spain a top five is a great result so we will see.