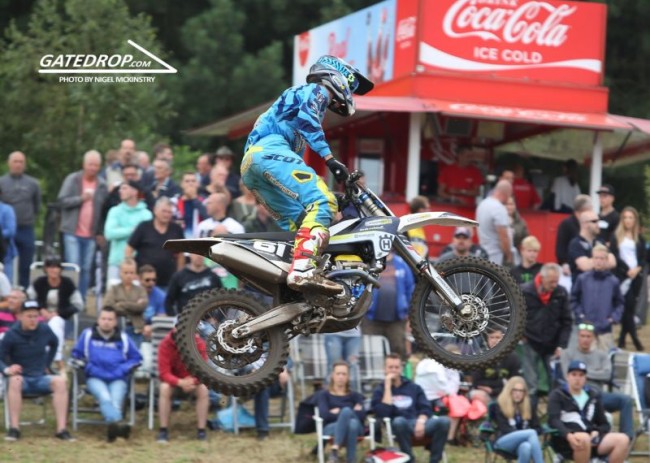 The Danish rider has attempted to win the title for a few years now so to finally clinch the title must feel great! There is no doubt that the Bodo Schmidt Husqvarna rider stepped it up for the 2016 season and deserves to win this title.

The 2017 season will bring a new challenge as he reveals that he has already signed a deal to race the MX2 World Championship, if Thomas keeps improving then he can surprise some people in that class.

We decided to sit down and talk with Thomas after he clinched the EMX250 championship at Lommel.

Gatedrop: Thomas, how does it feel to be EMX250 champion?

Thomas Kjer Olsen: Yeah, it feels really good. It was a long but nice day, the first moto was really tough. It is a big title and I was a little nervous before the race but I handled it really well and I was able to get second. That was the goal before I came here so I could give it my all in the second moto. I got an okay start in the second moto and pushed my way to the front on the first lap I think. I just tried to ride my own race but I could see Bas (Vaessen) coming, he was really fast in the second moto.  I made a couple of mistakes when he caught up to me and he got by, he got a little gap, I had to re-focus, I charged back on the last lap but it was a little bit too late. I thought I gave it my all today so it was good.

Gatedrop:  Bas was putting a lot of pressure on you in that second moto. Was it the pressure from him that made you make those mistakes?

Thomas Kjer Olsen: Yeah, maybe it was the pressure but the track is difficult out there so it’s difficult to ride with no mistakes. It was just a stupid mistake on my part but that’s how it is.

Gatedrop: You started the year really strong, have you played it safe the last few rounds knowing that the title was on the line?

Thomas Kjer Olsen: I actually want to say no because I tried to push a lot but I had a hard time during the middle of the season. I had to figure out somethings about myself and how to do things. I felt like I figured it out for this last round, I ended up second place here at Lommel. But yeah, to come away with the title one round before the end, that is really positive and I want to be even stronger for the last few races. I have some ADAC Masters and a GP next weekend.

Gatedrop: Now you have won the title does that take the pressure off you and now you can come out swinging in Switzerland..

Thomas Kjer Olsen: Yeah, I am going to do the GP in Switzerland so that will be exciting. I could feel during the second moto today that when I had the championship in my pocket I could ride more free. There have definitely been some long weeks from Mantova to here, I was really nervous and it’s easy to get injured or something when you have that in the back of your head. I am just really happy that I stayed focused every practice we did and come here to get the title.

Gatedrop: What are your expectations for the GP of Switzerland?

Thomas Kjer Olsen:  I want to go there and do good but my expectations, I want to keep to myself right now (laughs). The basics are just to go there and have fun, I feel like I am riding good right now so yeah, if I am happy with my riding there then I am sure I am going to get a good result.

Gatedrop: I believe you will ride with a factory Husqvarna engine in Switzerland?

Thomas Kjer Olsen: Yeah, I can’t speak about that at the moment.

Gatedrop: For next year will we see you race the entire MX2 World Championship?

Thomas Kjer Olsen: Yeah, I have already signed a deal so I am really looking forward to next year in the MX2 class.

Gatedrop: Have you got plans for the winter yet about where you will be based?

Thomas Kjer Olsen: No, that’s not planned yet but I am sure we will figure it out and get a good winter and come back even stronger next year for sure. Hopefully some good results next year also.